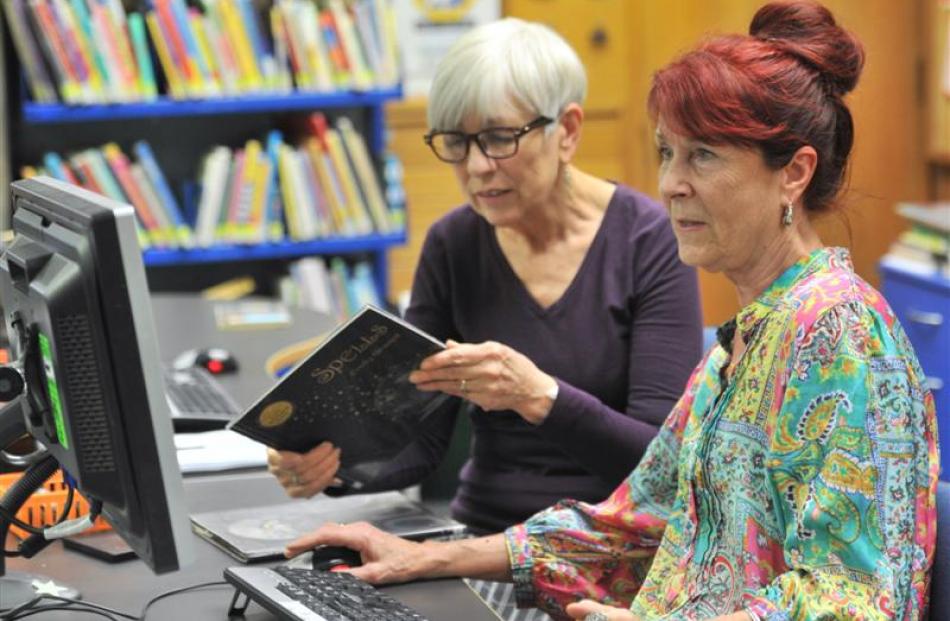 The modern librarian is extremely helpful, unlike some in the past, writes Roy Colbert. Pictured in 2014 are youth services librarian Phillipa Crack (left) and senior library assistant Olga Hemmingsen. Photo by Linda Robertson.

Growing up carries with it a thousand memories of fear.

Wasps, the disciplinary leather strap, girls telling the teacher you said a swear word in the playground (now boys just cut out the middle man and swear at the teachers), swimming lessons and woman librarians were ones I battled every day.

This is no unforgiveable sexist jibe.

I clutch the heart on my dog's grave and say there were no male librarians at the start of the 1960s, and if you tell me there were, I will just put my hands over my ears.

The woman librarian's seething draconian glare at the sight of a small boy was a memory dredged up a couple of weeks ago when I received an invitation from the Dunedin Public Library to take part in strategic discussion on where the library should be going in this fast-changing digital world.

Unfortunately, my excessive social calendar, currently administered by not one but two PAs, one of them inexplicably mired in a Disputes Tribunal hearing regarding overtime payment, prevented me from being available for this meeting.

But it did set me to thinking as to how libraries have changed.

To its credit, the Dunedin Public Library, the only one I know, has done exceptionally well.

It has brought in male librarians, and its women are some of the finest people I know: intelligent, bright-eyed, stunningly engaging, and helpful to a fault.

This is where the 1960s dragons fell down impossibly, when even Satan's Cave was too elevated a position for their presence.

Was there a more useless and time-consuming glob of nothing than the primary school project? No there wasn't.

Had these projects been on rock'n'roll or Beano comics, then, fine, I would have been there, dude, but they weren't; they were always about trees or the Antarctic.

There was no internet then, and while there were encyclopaedias, they were glutted with small print and incomprehensible if you were stupid or lazy.

Being both, and too blind to read small print, I had to resort to the Dunedin Public Library.

After walking around utterly confused, I would eventually summon the courage to approach a desk, behind which sat a woman, who would glare, who was draconian, and who seethed like a serpent.

Had she been rude, she might have rasped, ''Yes?'', but these woman librarians were worse than rude, they were silent.

So I would ask them in the most timid of tones if they had anything on trees, and they would just glare again and then look back down at their desk as if I hadn't spoken.

This was possibly because I was so small in the early '60s only a thin top line of hair was visible to them, and let's face it, that could have just been a caterpillar.

So I would jump up as high as my legs would take me, shouting ''Trees!'' at the apex of the leap.

If I was lucky, she might point. Somewhere. I had no idea where, I was back down on the floor below the level of the desk.

And if I ever found a book on trees, there were no photocopiers, and I still went to Sunday School, so I didn't rip pages out of books. Copying was the only solution.

And that took hours and hours.

And you couldn't read your writing when you got back home.

I never ever got a decent mark for a primary school project.

But now there is Google and the library has computers.

Librarians scuttle off with I-can-help smiles when you ask an idiot question - I must have sent them into the basement a thousand times with requests, on the third floor especially - and, for God's sake, they even provide you with a lovely choir at Christmas.

Auctioneer Kevin Hayward told me on his retirement last month that books were unsaleable.

Op shops are full of free books, good books. Where to for the modern library?

Keyboard fingers crossed. But at the very least, they are a friendly and wonderful place to be.