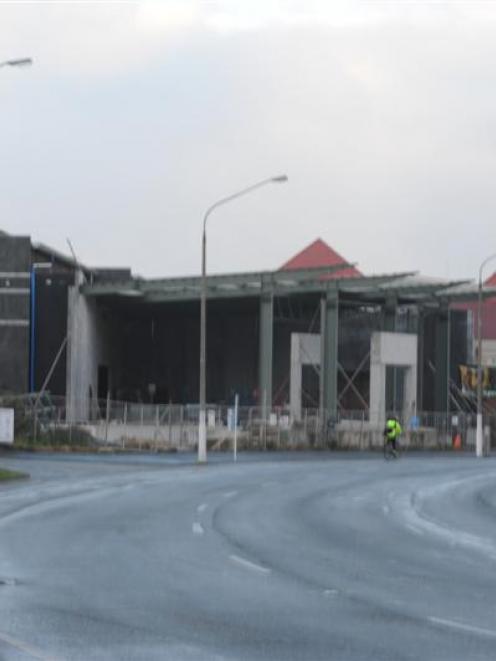 Examples of getting things wrong in the name game abound. Photo by Craig Baxter.
Let's settle for The Settlers, reckons Jim Sullivan.

Why do the bureaucrats have a renaming frenzy every time something is opened, rebuilt or amalgamated?

The Dunedin City Council is about to release the name chosen for the revamped museum near the railway station. Security is tight as the whole matter is "commercially sensitive". We are told the chosen name might be pinched by the Victoria and Albert in London or the Rijksmuseum in Amsterdam before we can paint it up on our new multimillion-dollar building.

But you know and I know it must be called "The Settlers".

For years everyone has called it that and to hold a poll offering what sound like PR-speak creations like First City Museum, Platform 2, Heritage Depot and Rewind Otago was pretty much a waste of time, but such is the way of bureaucracy when it goes overboard about listening to the voice of the people.

Not long ago the council employed a "policy analyst" to handle the complex task of ensuring that names are given to three rooms in the revamped Municipal Chambers and Dunedin Centre. A great deal of anguish and, dare I say it, name calling, will be the outcome of this misguided policy. The basic truth of the matter is that rooms do not need names.

Unfortunately, we have already started down the slippery slope of naming rooms in the Municipal Chambers. Two sister city names have already been used. The Edinburgh connection strikes a chord with most citizens but the "Otaru Room" title is meaningless to most of us, apart from those who have scored a free trip to that Japanese city on a fact-finding junket. The "Shanghai Room" and the "Portsmouth Room" engender neither pride nor fascination so we can drop them.

Using the names of previous mayors is another option which has already been used. Sir Clifford Skeggs has made an outstanding contribution to the city but even he would admit the "Clifford Skeggs Gallery" is bit of a mouthful. A "Richard Walls Room" has been suggested and that would certainly honour an outstanding local body leader, but there remains the problem of other faithful servants who have done good for the city but for whom a named room would entail building about four more new Municipal Chambers.

Examples of getting things wrong in the name game abound.

Only recently, after the merger of three schools in the South Dunedin area was approved, the establishing board of trustees suggested "Otepoti South" as the name for the new school and this was approved by the Ministry of Education. The paperwork apparently described the new name as "Maori for Dunedin South" and given the squabbling which surrounded the merger process in the first place and the inability of the Ministry of Education to get anything right, no wonder such a nonsense was ever suggested. For a start, the Maori phrase for "Dunedin South" would surely include the Maori word for "south". Mixing two languages is a cardinal error in dreaming up place names.

While all this paper-shuffling was going on, everyone was calling it Carisbrook School and when common sense finally got a look in that's what they called it.

In fact, in our entire history changing names has done very little good. Years ago the European Hotel in Princes St became Brackens and sank without trace. The PR-wonder kids dreamed up "Good Health Wanganui", which never managed to replace the name everybody used, "the Wanganui [now Whanganui] Health Board".

From time to time a name-change is justified but the last one I support happened in 1869, when citizens of Tutaenui discovered that the English translation was "large amount of dung". They promptly changed the name to Marton, after the birthplace of Captain Cook. In Canterbury an official suggestion which locals firmly rejected was "Cheddar" for the cheese-producing district of Doyleston. It is still Doyleston. German names upset people during World War 1 so there was little opposition when German Bay on Banks Peninsula was changed to Takematua.

But if popularity polls must be held to rename things, let's not be afraid of leaving the name pretty much as it is. Many years ago, another group of bureaucrats, this time the Timaru City Council, held a contest to name a new loop road to the port and offered some pretty swept-up suggestions, many reflecting a new dawn for the city or honouring old-time harbour board dignitaries. After hundreds of entries had been received, the winner by a million miles was "Port Loop Rd", exactly what the locals had been calling it for months.

For us, "The Settlers" will do just fine.

- Jim Sullivan is a Dunedin writer and broadcaster.