Have the coat, need an occasion 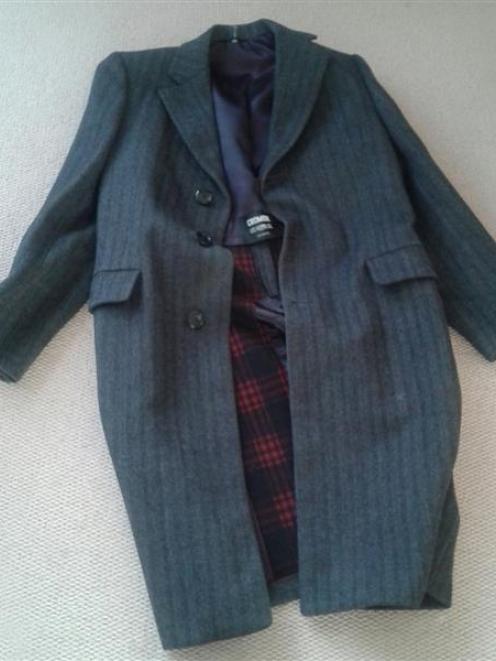 Photo supplied.
There comes a time, after the chronological accident of high school, which threw you together with unlikely humans, that you gather together real friends, who share common interests and exist on an approximately similar intellectual level.

Occasionally, you might find you have chosen a real friend who doesn't actually like Good Goody Gumdrop ice-cream or Beavis and Butthead, but most of the time, life soon becomes an unrelenting chorus of, yeah, me too.

Imagine, then, my bewilderment a couple of weeks ago when I announced to my coterie of close personal friends that I had bought a Crombie.

The appropriate responses to this information should vary from, way to go, through, I have always wanted a Crombie, to, you lucky so and so.

Instead, to a man, to a woman, I was asked, what a Crombie was.

Knowing me well, a number of friends surmised it must be a type of high-calorie trash food, maybe some fusion of crumble and Crunchie: one fella, even mindful of the fact I don't drive, thought it could be a car.

No, a Crombie is a piece of clothing, in this particular case, an overcoat.

Crombie has been making superior clothing since 1805, and its overcoats have been worn by royalty up to this present day, plus, if you should actually need more evidence than this, Napoleon, Clark Gable, John F. Kennedy and, you had better be sitting down for this one, David Beckham.

Oh, a final nail for the ignorance coffin, the Beatles' velvet collar suits were Crombies.

That my intellectually similar friends carry no knowledge of Crombie in their tiny brains was an affront to everything I believe in.

The brain is a sponge, and Wikipedia is a tap with no washers.

Get with the program.

It was a bitterly cold day when I bought the Crombie.

The sun was shining down like honey, but 300m into town, I noticed the body had gone arctically rigid.

The sun had deluded me.

I needed an overcoat without any further ado.

The cold had almost prevented me from moving, but fortunately the Sally Army store was only 50m away, and the warm glow that constantly exudes from the purchases and personnel inside defrosted my body fiercely.

I entered the store with steam coming out of the top of my head.

I just needed something for one day - there is a fine Rodd & Gunn coat, as worn by the All Blacks, already wardrobed at home - and right at the end of the overcoat rack, as if just placed there seconds before, was a mint and utterly spiffing coat, the like of which I had never seen.

I lifted it down - and it threw me to the ground like a used rag.

Heavy! There must be heavier words than heavy.

I lay under it for a while, then manager Dorothy rescued me, and between the two of us we were able to lay the coat out on a table and examine the cut of its jib.

I have never been able to afford all wool.

My clothing materials have names like taffron and kolypester, always made in China.

This was made in England!

It was a Crombie.

It is pointless to add the coat fitted me like a ballerina's sock.

A Crombie is so exquisitely made that it fits every human shape like skin itself.

At the Crombie stores in Savile Row they have long done away with fitting rooms and mirrors.

They need only a cash register.

Did I mention what the cost?

I had better not.

There are people out there who actually know what a Crombie is.

No need to cause cardiac arrest.

I have yet to wear the Crombie.

Of course, one doesn't wear a Crombie, one is merely seen inside it.

And modesty and low socio-economic tac is my middle name.

I shall reserve the Crombie for unique occasions.