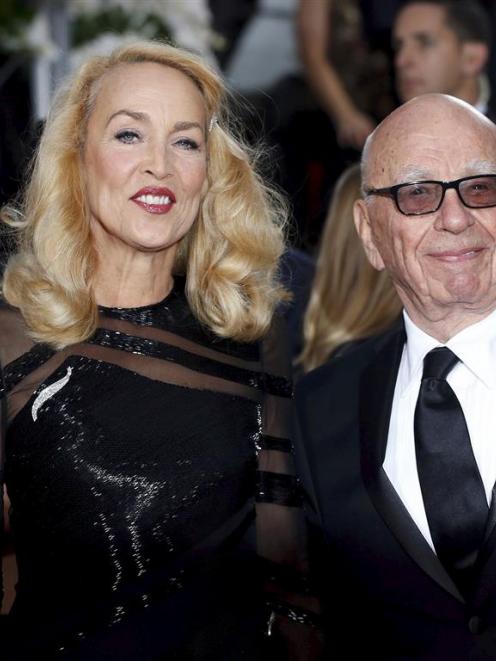 Model Jerry Hall and media magnate Rupert Murdoch announced their engagement in an advertisement published in The Times newspaper in January. Photo by Reuters.
As someone who has curled in and out of the media for most of my adult life, I love what we media people call "the silly season'', that time of the year when somehow we patch together programmes or newspapers despite so many (male) staff lying beer-comatose on their backs staring into the sun.

It does seem sometimes that the ones left working are the ones with sunstroke, but that's not altogether fair, for the world seems to enjoy behaving bizarrely at this time as well. I stared at the sun very little this holiday season.

Instead, I stared intently at our media.

One News kicked off 2016 with the startling story of the trotting driver at Omakau who was found to be drunk in charge of a horse, for the first time ever in New Zealand harness racing.

As a regular attender of the Omakau Races through our holiday home being just over the hill, I will swear on my dog's grave that every single driver in charge of the horses I have bet on has been drunk.

Often these horses would jump the fence and join me by the cherry stall, or bound off across the paddocks towards Ophir.

No horse would do this unless the driver was utterly hammered.

This story, incidentally, was the second lead item on One News, heading off a number of global crises.

Every form of the media leaped excitedly on the news that Rupert Murdoch (121) was going to marry Jerry Hall (94 - I am estimating their ages conservatively).

This is, of course, neither here nor there - rich old men marry younger women all the time.

But what was astonishing to me was the news that Jerry and Mick Jagger had not been married after all - the Bali ceremony in 1993 was a kind of fancy dress party, not a wedding.

This was a real shame for me as this happened two days after we holidayed there, a fact I parlayed into claiming I had attended Mick Jagger's wedding for many years.

Worse, the four children produced from that morally indignant union are now officially born out of wedlock, a tragedy for an English gentleman like Mick, who is regularly seen watching cricket at Lord's.

The ODT gave full coverage to the people who drove three cars on to Tomahawk Beach, something we learn not to do at preschool.

Some locals rescued the vehicles and were then shouted loudly at the next day in the police station after claiming a few hundred dollars for their trouble.

This should have LED television news.

This newspaper's thoroughly laudable policy of filling the front page with local stories continued three days later with a report shoals of bumblebees had been sweeping pestilently across the city.

I know I could live 12 generations and not see anything even one quarter as amazing as this.

Even the advertisements got a little silly.

Teachers stop looking at the date in early January for fear it will remind them the school year is nigh.

Imagine then their discomfort when a headphones advertisement, in early January, punned Back To Skull, a reminder not only that the end of the holiday was indeed nigh, but also that many cellphone-reared pupils can't spell.

The Timaru man who won $7million on Powerball was a good one.

Checking the draw on his computer, he found he had the first four numbers.

So he turned the computer off.

And finally, the remarkable news that the gap between male and female incomes has actually increased, standing now at $15,000, remarkable also because the story was only on page 3.

But there was a better one pushing it off the ODT front page - two academics had mercifully challenged the outrageous Lion-funded paper that there was no direct relation between alcohol and violence.

What an unbelievable claim, bollocks veritably raining from the skies like bumblebees.