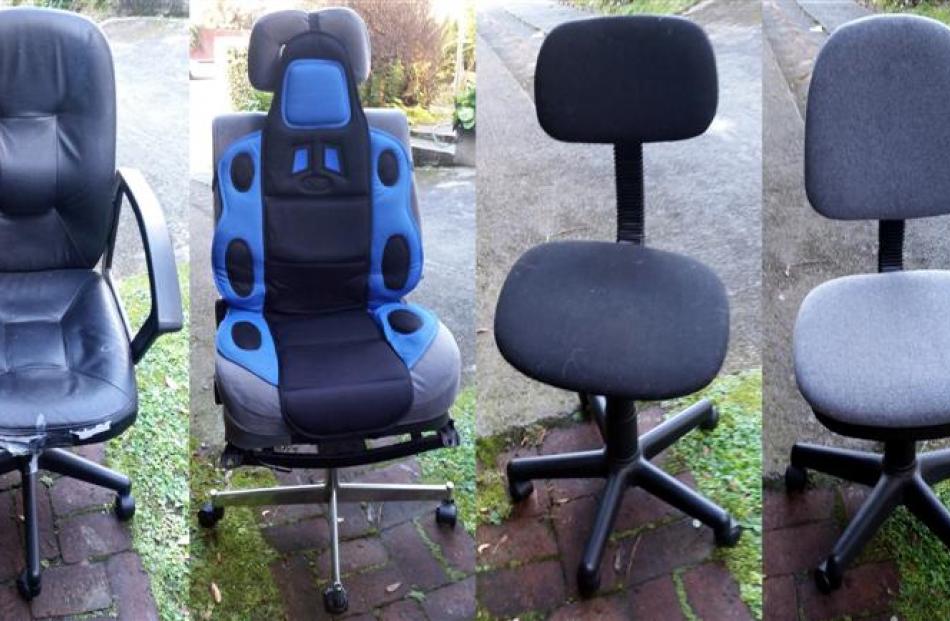 Sixties movie siren Mamie Van Doren - could we ever forget The Beat Generation, or, most especially, High School Confidential? - once opined that you can tell the cut of a man's jib from his choice in office chairs.

This is possibly the most magnificently true statement I have ever heard, and I have lived a long and productive life.

Pressed further on this topic, the virtually perfect Mamie said it was neither number nor style that twigged her tulips, but rather an irresistible combination of the two.

Mamie and I have never met, she isn't even a Facebook friend, but I feel confident she would approve of the number of office chairs I have possessed, four, and certainly their style, wildly erratic, for in the world of cinema, there were none as wildly erratic as Mamie Van Doren.

Office Chair The First lasted the final 14 years at Records Records after I snapped it up on a whim for $99.95, half-price, at Kmart.

I didn't expect a long life from this chair, but it was still purring like a lovely big comfy cat when I sold the store and took the chair home for Man Cave duty.

This chair twirled like no other I have ever twirled in, and as I was repeatedly asked to twirl around to the visitor's chair by the window to make a witty retort or accept a cup of coffee, this became pretty much the most exciting thing I ever did in Records Records, achieving almost toreador status with cape by the end.

The chair soldiered on at home before the Tsunami Twins, the grandsons Row and Jude, arrived from Chicago.

These boys were circus-level acrobats at birth, and continued to perfect their craft of hurtling through the air in the lounge, stripping our mock-leather chairs to the bone.

They soon moved to the Man Cave, and learnt to sail through the air, together, from halfway down the hallway, the ageing front of the chair meeting their buckle-booted landing with a sigh. (See picture.)

Office Chair The Second was found in the Princes St Salvation Army store, $25, seemingly superb when I auditioned it with my bottom, and large enough to accommodate both grandchildren at the same time.

It was also a stunning piece of furniture - a child's car seat welded on to wheeled legs - which I could only compare to the Frank Lloyd Wright furniture I had seen at the New York Museum of Modern Art.

But my audition proved skimpy, and when I got it home, wheeling it the whole way to a chorus of mocking horns from main street traffic, I found the height could not be adjusted, hence I slowly began corkscrewing my back and spine silly by typing from far above.

I kept the giant car seat for a year to defend my purchase, but last October, unrelenting pain drove me back to the Sally Army store.

And there was Office Chair The Third, small but functional in every way an office chair should be.

No more cross-country steering along a main street either, I just whanged it under my arm like a newspaper or a screaming child, and tottled off home whistling The Sound of Music's inspirational Lonely Goatherd.

The grandchildren mercifully ignored Office Chair The Third, instead squeezing into Office Chair The Second to play Minecraft six hours a day, often wrapped snugly in the big rug I would rather liked to have had available in the lounge where my ageing bones were shivering like bantams at a bonspiel.

Then one day I went into the Man Cave and found Office Chair The Third was sagging dangerously on one side, almost as if a grandchild had thrown himself at it from a distance, and half-missed.

I sat on it just once and was flung against the wall like an emptied vodka glass. I needed a new chair.

And this is from where I am typing today, a sober but sound chair, so unlike Mamie Van Doren, yet well worthy of House & Garden.

$15 from, yes, Sally Army. And, grandchildren notwithstanding, I'll warrant this understated little gem will see me out.