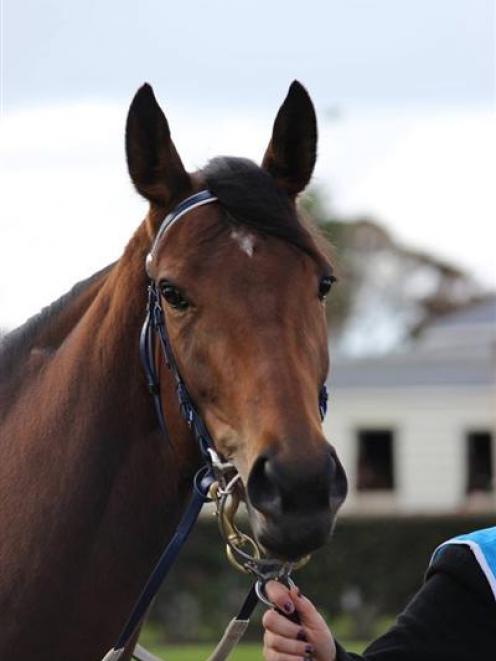 Sisterhood made her race debut at Avondale. Photo by Social Racing.
A complete stranger, male, small, assailed me in Diesoline Cafe last week, whanging the preposterous theory down on the table that my column-ending predictions and promises are bunkum, that they would never, or could never, happen.

Of course it may not have been a complete stranger, given that I am afflicted by prosopagnosia.

I have even been interviewed by Jeff Harford on Otago Access Radio on this very terrible condition - wherein facial blindness prevents the prosopagnosiac from recognising people - so it must be true. Me and The Complete Stranger talked for some time, and he never assumed a recognisable shape, so, to The Complete Stranger today, I can only say what I said last week: Pshaw and the horse you rode in on.

He was still reeling from my claim the week before that Bono would be singing his stadium hits in a tiny shed with a lute in the very near future. Then he leaned into my face.

''Your racehorses will never win,'' said The Complete Stranger. Which is just silly. The three well-bred girl horses I wrote on July 29 I had a 1/200th share in are poised for huge money.

Last week, Sisterhood made her race debut in a sprint at Avondale, and on a bog-heavy track with rain pouring from the skies like rhinoceros urine (Sisterhood prefers distance, and a very firm track) the plucky battler came home sixth.

Sure there were only six in the race, but sixth is sixth no matter which way you look at it. In fact, sixth in the Melbourne Cup is $125,000.

As for the other two, Social Kay is back in training after being derailed by growth spurts, and our ace-in-the-hole, Aotearower, part-owned by world champion rowers Mahe Drysdale, Eric Murray and Hamish Bond, has run twice for a fourth and a second.

She has won nearly $3000, and those out there for whom maths is a second language will know that means I have made $15. The investment was $199, so I am winning THAT particular race, Complete Stranger.

On July 8, I said I would turn down national super - I think that was a typo - and on May 27, I said I would stay in bed all day long forever. I was speaking in metaphor.

The previous week I announced I would be ringing up Winston Peters, but Winston has been desperately busy and committed to the future of the country. He would have put me on hold.

The fading black Levi jeans held together at the knee by gaffer tape I claimed to wear all the time were thrown out shortly after that assertion of April 15, and the prediction run up the flagpole the week before, that wasps would come for me in a stinging bedrizzled lava of mutant butterflies during winter, clearly hasn't happened.

I don't know why. Google Maps might not work for wasps.

My people in quite high places at the university report that my belief the problem of the ever-dripping soup spoon was not in fact on the agenda during the co-operative medical science projects with Jiao Tong University in Shanghai , though that column was on April 1.

Few Complete Strangers understand satire. And on March 18, I swore on my dog's grave I would write again to the internet scammer Kerr David of London, but no such message was ever sent.

However, March was a desperately busy month for me, as I was planting chanterelle mushrooms. On January 28, I threatened to return to Purakaunui after suffering a debilitating hypoglycaemic attack down there trying to replicate the outrageous survival intelligence of Bear Grylls. But I have never returned to that beach, too dangerous by half.

But I can weasel my way out of this. JohnKeySpeak. The Complete Stranger has no evidence. He is nothing more than a little henchman.