Such an evening of music can gladden the heart 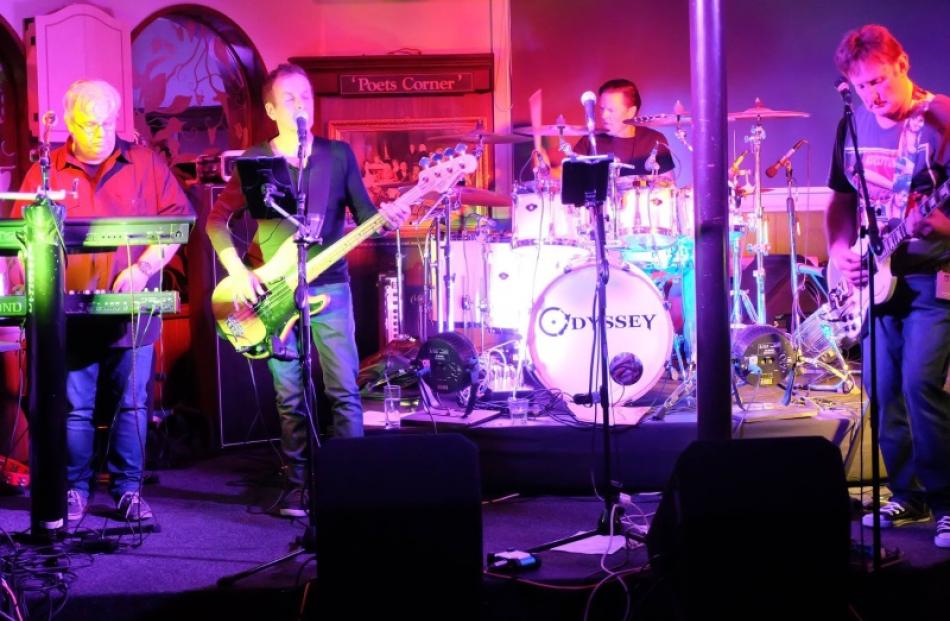 The evening began at the former Rugby Hotel in Carroll St.

A friend, Alastair, now owns this once salacious watering hole, and he has been running itinerant arts events there over the past few months.

Saturday, November 21 was for poet John Dickson, Dixie, for so many years a Dunedin identity, more recently resident in Christchurch, and now sadly laid low by serious illness.

I rang around the acid cabal from the early '70s, and some of them showed.

Chris, guitarist in the cabal's house band Stash, notoriously forgetful, I left until the actual day.

But I didn't expect him to come.

He did, so he must have thought this was a pretty special thing.

Dixie read with the voice and between-poem chatter of someone who knew the days were diminishing.

He is much more than that, among many other things, he is a really good poet.

The one called Miles Davis was mesmerising.

Then it was the Robbie Burns for the return to Dunedin, after 39 years, of the Christchurch band Odyssey.

Its lineage began here in the early 1970s as NZ Fantasy, which evolved from Fantasy, guitarist Ronnie Harris replacing the Chris who was standing beside me an hour before at the Rugby, when the band headed for Christchurch and global fame.

Ace HMV producer Peter Dawkins had come down to see if Fantasy were worthy of a contract.

He certainly loved the singer, Craig Scott, whom he would later turn into the country's biggest pop star.

He told Chris - most of the band were called Chris, so people called two of them Chop and Kag - to lose the glasses.

Chris was good, he could play Sabre Dance, but probably not without glasses.

He stayed in Dunedin.

In the end, Dawkins just took the singer, and there was a new band in town called NZ Fantasy under Ronnie's wing.

I remember Jeff Stribling and Bill Kearns as pretty much kids, 16 years old.

Stribling soon had the local drummers coming around to check him out.

It might have been urban myth, or merely my bad memory, but the story I heard and have carried round since was that he learnt his moves from playing behind strippers.

And it made sense, to complement slink and slick disrobe, you would need to have snap, crackle and pop.

NZ Fantasy almost made a record in Dunedin, at a time when nobody in Dunedin made records.

But their debut came out when they were Odyssey, in Christchurch, a couple of years later, a cover of The Easybeats' song Sorry.

Twenty years after that, I would slip it into the Dunedin triple CD compilation But I Can Write Songs Okay.

It was Dunedin, really.

Odyssey's core audience was at a Musicians Club function, so the crowd was sadly small.

But they played great, incredibly, just like a young band starting out.

Mainly covers, sure, and while the fabled Dunedin Sounders disown such things, I still remember Mick Dawson of The Enemy, the founding Dunedin Sound band, wondering, as we all sat around one night, if maybe The Enemy could do just a few covers, coz they ''felt so good to play''.

They also feel good to hear and watch, if they're the right covers.

I talked to them afterwards.

Jeff and I love The Goons.

I gave him a promised DVD containing every single Goons show.

Ronnie proudly displayed his Gibson, the same one, 48 years, he said.

I gave him the $20 I had initially saved by being on the door.

At Shayne Carter's mum Ricci's funeral last week, they showed a video of her during the making of her album.

Ricci did covers too.