Writing recently in the Washington Post, Brian Michael Jenkins, a senior adviser at the Rand Corporation think tank, claimed that the 9/11 attacks 10 years ago were not a strategic success for al Qaeda.

He's right. Osama bin Laden's strategy did fail, in the end - but not for the reason that Jenkins thinks.

Jenkins argues that Osama bin Laden believed the United States was a paper tiger because it had no stomach for casualties. Kill enough Americans, and the US would pull out of the Middle East, leaving the field free for al Qaeda's project of overthrowing all the secular Arab regimes and imposing Islamist rule on everybody.

In bin Laden's 1996 fatwa declaring war on America, Jenkins pointed out, he claimed that the US would flee the region if attacked seriously.

Indeed, bin Laden gave the rapid US military withdrawal from Lebanon after the bombing of the Marine barracks in Beirut in 1983, and the equally rapid retreat of American forces from Somalia in 1993 after 18 US soldiers were killed in Mogadishu, as examples of American cowardice.

Other al Qaeda commanders disagreed, Mr Jenkins says, warning that the 9/11 attacks would enrage the US and "focus its fury on the terrorist group and its allies, but bin Laden pushed ahead. When the US did [invade Afghanistan], bin Laden switched gears, claiming that he had intended all along to provoke the US into waging a war that would galvanise all of Islam against it".

Mr Jenkins is quite explicitly saying that bin Laden never realised that the US would respond violently when his organisation murdered thousands of Americans. He would have been dismayed when the US invaded Afghanistan and destroyed his training camps.

And therefore, the think-tank expert concludes, the US did not fall into a trap that bin Laden had deliberately laid for it when it invaded Afghanistan.

Well, that's one point of view. Here's another. Bin Laden was fully aware that the US would invade Afghanistan in response to the 9/11 attacks, and he wanted it to do so.

He believed that the US would then get mired in a long and bloody guerrilla war in Afghanistan, a replay of the war against the Soviet invasion of Afghanistan in the 1980s in which bin Laden himself had first risen to prominence.

Bin Laden hoped that a protracted guerrilla war in Afghanistan, with American troops killing lots of Muslims, would indeed "galvanise all of Islam" against the US.

So why didn't he say that beforehand? Why did he claim that the US would flee screaming at the first atrocity, if he really expected it to invade Afghanistan?

Because revolutionaries who resort to terrorism always talk freely about their goals, but they never publicly discuss their strategy for achieving them. They can't, because the strategy is so profoundly callous and cynical.

Terrorists generally have rational political goals - usually a revolution of some kind. In bin Laden's case, he wanted Islamist revolutions across the Muslim world, but he had been notably unsuccessful in whipping up popular support for such revolutions.

So how could he build that support? Well, how about luring the US into invading a Muslim country?

Revolutionary groups often resort to terrorism if they think they lack popular support. Their aim is to trick their much more powerful opponent (usually a government) into doing terrible things that will alienate the population and drive it into their arms: it's the political equivalent of jiu-jitsu.

They are trying to bring horror and death down on the population by triggering a government crack-down or a foreign occupation, in the hope that it will radicalise people and turn them into supporters of the terrorists' political project.

But the people they seek to manipulate must believe that it was the oppressors or the foreign occupiers, not the terrorists, who pulled the trigger. That's why bin Laden lied about his strategy.

He probably didn't even warn his Taliban hosts in Afghanistan that he was planning 9/11, because they would not have welcomed the prospect of being driven from power and having to fight another 10-year guerrilla war against another invading superpower.

Bin Laden's strategy was not original with him: he had been fighting as a guerrilla and a terrorist leader for 15 years by the time of 9/11, and people of this sort have always read all the standard texts on their chosen trade.

The notion of using the opponent's strength against him absolutely permeates the "how to" books on guerrilla war and terrorism, from Mao to Marighella.

So bin Laden dug a trap, and the US fell into it. In that sense his strategy succeeded, and the guerrilla war that ensued in Afghanistan did much to turn Arab and Muslim popular opinion against America. (The invasion of Iraq did even more damage to America's reputation, but that really wasn't about terrorism at all.)

In the long run, however, bin Laden's strategy failed, simply because his project was unacceptable and implausible to most Muslims.

And the most decisive rejection of his strategy is the fact that the oppressive old Arab regimes are now being overthrown, for the most part nonviolently, by revolutionaries who want democracy and freedom, not Islamist rule. 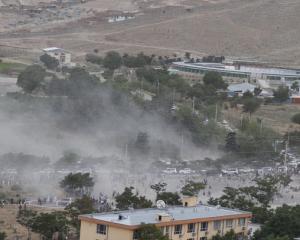