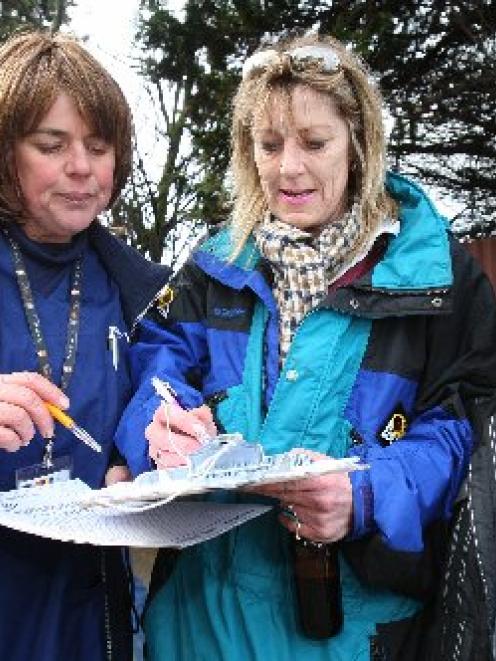 Annette Laidlaw, of Dunedin (but formerly of Southland), with her son Reuben Wairau (9), signs a neurosurgery petition for Southland Hospital nurse Cathie Cotter (left), of Woodlands, at the Southland Stags v Otago Ranfurly Shield Challenge rugby match at Invercargill's Rugby Park on Saturday evening. Photo by The Southland Times.
Doubt about the power of the Director-general of Health to impose a final decision in the South Island neurosurgery dispute has been raised by Southern District Health Board member Richard Thomson.

Mr Thomson yesterday said the board had not passed any resolution giving the Director-general power to make a binding decision on the issue.

Mr Thomson alleges the section of the expert panel's terms of reference which states the Director-general will make a decision following the panel's advice "and that decision will be final" has no legislative basis.

Mr Thomson contends that the Minister of Health would be the only person with the power to enforce any decision that Southern was to cease providing neurosurgery services.

He called for clarification on the question.

In a brief email statement, Mr Bridgman said the Director-general was invited to arbitrate and that was what he would do on receiving the advice of the expert panel.

The chairwoman of the panel had made it very clear the panel wished to canvass all viewpoints from the interested parties and at this point had no view on the best configuration.

He urged Mr Thomson, as a board member, to help ensure the board "fully and appropriately takes part in the process".

Asked for comment on the terms of reference generally and the issue raised by Mr Thomson, board chief executive Brian Rousseau yesterday said he wished to discuss matters with the Ministry of Health today.

The terms of reference for the panel were released on Friday.

The appointment of the three-person panel by the former director-general Stephen McKernan came after Canterbury and Southern district health boards could not agree on a one-site or two-site regional neurosurgery service.

The May 27 letter from the South Island boards escalating the matter to Mr McKernan says this was done under the boards' collective decision-making framework.

It asked him to "appoint an arbitrator who is empowered to ensure that this impasse is resolved urgently".

However, the framework says nothing about arbitration, stating that where consensus is not reached after independent input or mediation, the "Director-general or nominee will be the default mediator".

The section of the decision-making document entitled "legislative framework" points out that since under existing legislation boards are autonomous entities they cannot be forced into making decisions that they "do not agree with by anyone other than a shareholding minister".

While ministers were empowered to instruct a board in a direction it might not necessarily agree with, this should be regarded as a last resort after all other mechanisms had failed to achieve agreement, the document states.

Last night, Canterbury District Health Board chief executive David Meates had not replied to a request for comment and the South Island health services planning chairman, Chris Fleming (South Canterbury), was on leave.

Mr Thomson, co-instigator of Facebook site Keep Neurosurgery in Dunedin, said he was impressed with what he had heard so far from panel chairwoman Anne Kolbe about taking into account the "many reasons" for retaining a Dunedin service.

In it she said one of the first things the panel would be doing would be discussing how to get constructive input from representatives of the public.

It had already asked for summaries of the 13,000 submissions to the minister and ministry.

"I really believe that if people are open to examining all the ideas coming forward we can present the Director-general with a proposal which strengthens South Island neurosurgical services for the future," her letter concluded.