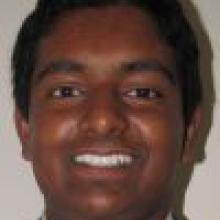 Jibi Kunnethedam
"Hey, bro, do you know what Anzac is?" Jibi Kunnethedam (16), of Oamaru, asked the audience, before delivering a speech that won him the Returned Services Association's (RSA) Cyril Bassett VC speech competition for the Otago Southland area.

A keen public speaker and debater, Jibi said he been involved in Scouts for most of his life and through the organisation had learned a lot about the war which helped develop his passion to learn more.

In his speech, delivered at the Alexandra RSA club yesterday, the St Kevin's College year 12 student talked about how Anzac was significant to all New Zealanders but how he thought some younger generations might be confused about what a soldier was due to the influence of modern technology, such as video games.

He had written the speech only two weeks ago but had learned it off by heart, which impressed judges Graeme Hunt, of Gore Toastmasters, and Wendy Harris, of Dunedin Toastmasters, who said he also gestured well and made good eye contact.

Jibi won $1000 for himself, $1000 for his school and the chance to compete at the national competitions to be held in Wellington on April 5.

The winner of the national competition will travel to Turkey to take part in the 97th commemoration of the Anzac landings at Gallipoli and recite the RSA's Ode to the Fallen in front of more than 20,000 people.

Otago Southland District RSA president John Longman said for others that had gone in the five years the competition had been operating, the trip had been a life-changing experience.