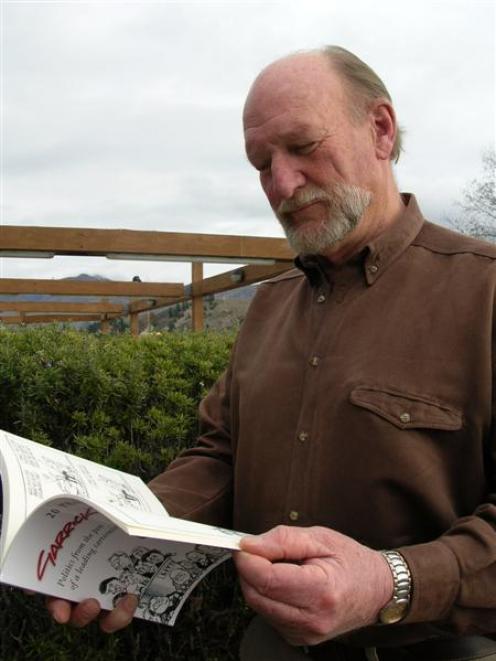 Arguably the most prolific New Zealand cartoonist, Tremain said he had never before been involved in a book launch, despite releasing more than 15 books.

His latest effort, titled Politics from the pen of a leading cartoonist, was the most substantial collection of his work and comprised 153 cartoons, he said.

From November last year and out of about 8000 cartoons, Tremain picked his favourites to be included in the book, which demonstrates his development as a cartoonist during two decades of the job.

Tremain said choosing was a difficult process, and the end result reflected between 1% and 2% of his total work.

"For every cartoon in the book there's about 70 that aren't," he said.

Each year for 15 years, Tremain compiled books containing the best 72 cartoons of 300 penned and published annually.

He said developments in his work were evident over the years, particularly in his drawing style.

"I can pretty much date a cartoon from the style of drawing, although drawing is the one thing which constantly disappoints me.

''I'm frequently pleased with the ideas I put into a cartoon but my drawing is always a disappointment."

Tremain said he had not become increasingly controversial in his cartoon work, although newspaper editors had relaxed their own issues about content.

''Even though my tendency is still to do cartoons which may offend a lot of people, there used to be no show of editors publishing my work and now there are more happy to have my cartoons in their newspapers," he said.

Despite this, Tremain said audiences still had taboo subjects and the topics likely to cause offence changed from region to region.

South Island audiences were less likely to appreciate jokes about sex and toilet humour than their North Island counterparts, but were not so adverse to racial cartoons.

"The further south you go, the more frightened people are of anything risque.

''At the same time, I've noticed over the years they [South Islanders] are more accepting of anything which could be construed as a racist remark, which probably has a lot to do with population spread in this country."

Tremain said of all the audiences he had drawn cartoons for in his career, Otago people understood him better than anyone, as the region had been more exposed to his style of satire.

"It's Otago where I first started and found an affinity with.

''I enjoy drawing for an Otago audience.

Now only a cartoonist for the Otago Daily Times, Tremain said he could focus his content on more local issues, such as the proposed Awatea stadium and the wind farm development in Central Otago.

Despite trying to retire last year, Tremain said he was humbled and appreciative of the support he received to continue his work, and there was no end in sight for his career at this stage.

"It's nice to know that what you do is important to some other people," he said.