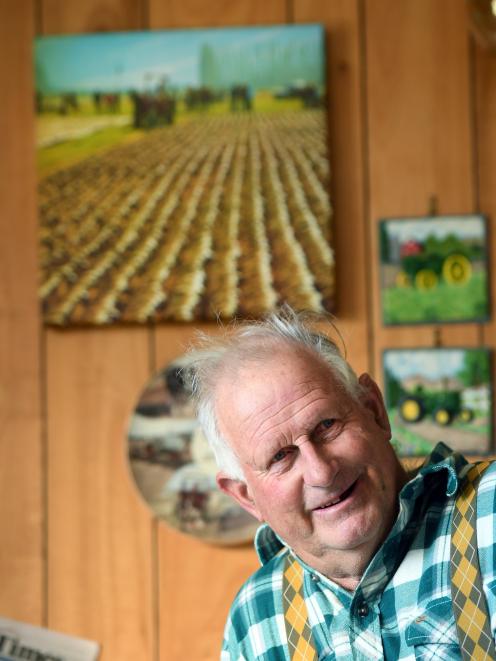 John Thornton will be acknowledged tonight for his family’s century of farming on the same land. Photo: Stephen Jaquiery.
Farming is all John Thornton has ever known.

The 73-year-old Taieri dairy farmer has spent his entire life on the Momona property originally acquired by his grandparents in 1916.

Tonight, the Thorntons will be among 36 families recognised at the New Zealand Century Farm and Station Awards in Lawrence for achieving 100 or more years farming their land.

Originally from Wigan, in Lancashire, England, Thomas Thornton brought his large family to New Zealand in the late 1800s.

A former seaman, he used to deliver horses to pioneer settler Johnny Jones at Waikouaiti, sailing the boat on to the beach at low tide and then kicking them overboard forcing  them to swim ashore.

His son Frank spent his early days as a seaman, later milking cows and breaking in horses at Heyward Point, near Port Chalmers.

He and his wife, Janet, bought 19 acres (7.6ha) in Centre Rd, Momona, in 1916, keen to be near the cheese factory and also to escape the January fog that made it challenging for haymaking.

That block of land has been the centre of the family’s farming operation ever since, although additional land was later purchased.

Wiganwood — as the farm is known, paying homage to the family’s origins — is now 150 acres (60ha), milking about 100 big Holstein Friesian cows.

Much had changed in the district over the years; it used to be that 100 acre (40ha) farms and 60-cow herds were the norm, Mr Thornton said.

Often, farming operations had "a bit of everything" — whether it was a few pigs or some potatoes, or farmers worked at the cheese factory or digging in power poles in the area.

Mr Thornton recalled growing potatoes at Wiganwood and he and his father, Bill, digging three tonnes a day.

When milk cheques increased, then "those wee sidekicks went" and farms  got a lot bigger, particularly in the last 20 years, he said.

Mr Thornton has had a staff member for 25 years, saying that as he got older, he could not do as much.As for retirement?

"One day, but I don’t know when. While I’m able to be doing a bit, I’ll be boxing on. The cows make you get up in the morning to milk them," he said.

Competitive ploughing has been a passion for Mr Thornton, who became hooked when he saw his first ploughing match when he was about 10.

It has taken him around the world and he has ploughed in three world championships — in Holland, Germany and Zimbabwe.

"If you’re having a good day, there’s nothing better [than ploughing] and you can go back the next day and see it. Tennis ... you’ve got to get a video," he said.

Mr Thornton has a fair few tractors and ploughs — "I seem to have quite a large collection" — on his property, although he said every tractor was capable of a day’s work.

A 1953 model had been at Wiganwood since it was bought new and it was still "quite a handy machine".

Six families will receive sesquicentennial awards tonight — honouring more than 150 years on the land — which was an "incredible achievement", chairman Symon Howard said.

The Matthews family, from Kaitaia, would be the oldest to receive an award to date, having farmed their land since 1839.Other southern families receiving awards tonight include the Allan family (Oamaru), Carruthers (Middlemarch), Emmerson (Tarras), McCall (Waikoikoi), Roseveare (Clinton), Webb (Cromwell), Drummond (Lumsden), Howe (Wyndham) and Wards (Gore).Applications were now open for the 2017 year and families that had owned and farmed their land since 1917 or earlier were encouraged to apply.