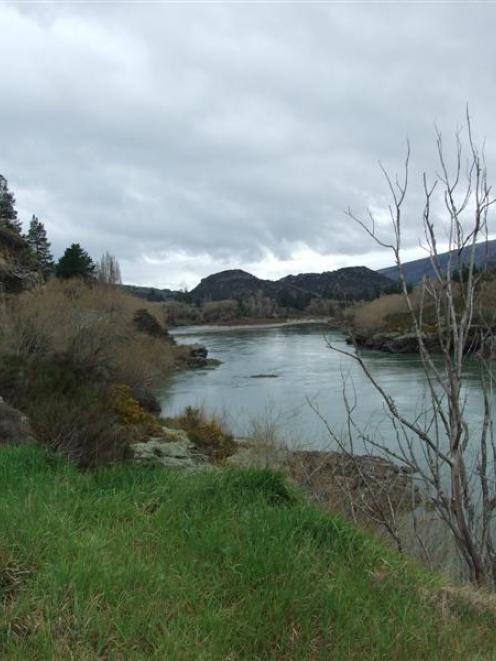 The Clutha River below Roxburgh, looking downstream. The proposed Clutha Gold trail would run down the left bank of the river at this point. Photo from ODT files.
An alternative route has been proposed for the Beaumont to Lawrence section of the Clutha Gold cycle trail and trust chairman Rod Peirce is confident it will proceed.

That section of the 73km trail from Roxburgh East to Lawrence is subject to engineering studies and the approval of the New Zealand Transport Agency, but Mr Peirce said initial discussions with the agency were "positive."

The alternative route involves the use of some highway road verge, combined with access through some private property. NZTA coastal Otago manager Roger Bailey agreed the talks were "promising" and said safety was the paramount concern. Engineering studies had to be carried out to see if the trail would fit safely.

Mr Peirce confirmed that changes to the route were made to work around a landowner who had declined to give permission for his land to be used.

"But we've always been working on achieving our aim, to get from Roxburgh through to Lawrence. That's the main priority and we're still confident of meeting our target. This variation won't make a huge difference to the trail, and we're pretty happy with the route," Mr Peirce said.

"The key factors of the route are still there - the farmland from Roxburgh to Beaumont and the Clutha River section."

The trail was the first in Central Otago to receive government funding under the New Zealand Cycle Trail project, with a grant of $2.5 million for the 50km Roxburgh East to Beaumont section. The feasibility study for the 33km Beaumont to Lawrence section is being updated to reapply for government funding for that section.

There are 150 landowners along the entire length of the planned route.

Mr Peirce was unsure whether the route change would alter the estimated $3.8 million cost of the project.

"We're making savings in one part and spending in other parts has increased, so we'll need to work those figures out."

The second part of the trail had certainly not "stalled", he said.

The Roxburgh East to Beaumont route has been finalised and the trust has applied for resource consent for works and structures on that portion, which is all within the Central Otago district.