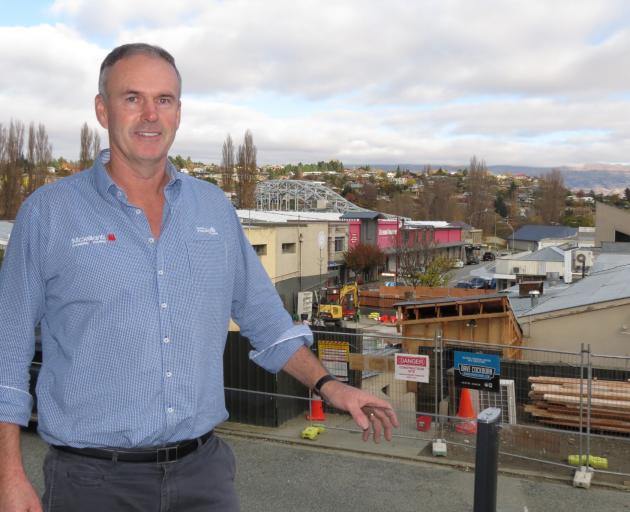 Rory McLellan has a bird’s-eye view of demolition at the former Shooters Bar site from the balcony of his McLellan’s Plumbing and Heating business in Alexandra. PHOTO: TRACIE BARRETT
Work has begun on a multifunctional entertainment and hospitality training hub in Tarbert St, Alexandra, although the original plans have been altered slightly.

Rory and Karen McLellan, who have owned McLellan’s Plumbing and Heating for 33 years, bought 19-21 Tarbert St in 2020 intending to create "a building and venue for everybody" and provide training for hospitality students.

Demolition has begun on the site of what was the Hotel Alexandra and the Town and Country Club, later Shooters Bar. Mr McLellan said rebuilding was due to begin in two weeks’ time.

"We’re looking at opening in the new year," he said.

Vincent Community Board chairman Martin McPherson said the town centre development was exciting, and added to a growing sense of optimism as other significant projects got under way.

An artist’s impression of the multipurpose entertainment hub planned for 19-21 Tarbert St, Alexandra. IMAGE: SUPPLIED
These include a new Countdown Supermarket in Centennial Ave and Ventry St (scheduled to open later this year), a new rural fire service station planned for Centennial Ave, a proposed new commercial building for Stihl earmarked for a site near Pioneer Park, and the Riverside Park and Alexandra Miners Village development.

"The ratepayers are paying $650,000 [towards Riverside Park] and I am not privy to all the details of the others but these are multimillion [dollar] investments. People really are excited," Cr McPherson said.

Plans made for the hub two years ago called for three bars, including a rooftop bar; three kitchens; a restaurant; takeaway outlet; and accommodation.

Mr McLellan said the rooftop bar and accommodation had since been removed to streamline planning consents.

He had never expected to be involved in such a project but said he and his wife loved Alexandra and felt such a complex was needed.

"Clyde has been well catered for but Alexandra is really lacking for a venue like this."

The couple plan to develop the building and get it ready for operation, then look for staff and a manager to run the complex.

"Karen and I will only oversee the business.

"We understand the challenges at the moment and have the depth within the team to manage the operation."

Mr McLellan is also chairman of the Alexandra Riverside Park Trust, which has spent 10 years working to fund and develop Riverside Park — a waterside project to connect the CBD to the Clutha River.

He said the trust and the Central Otago District Council were making good progress to redevelop the area.