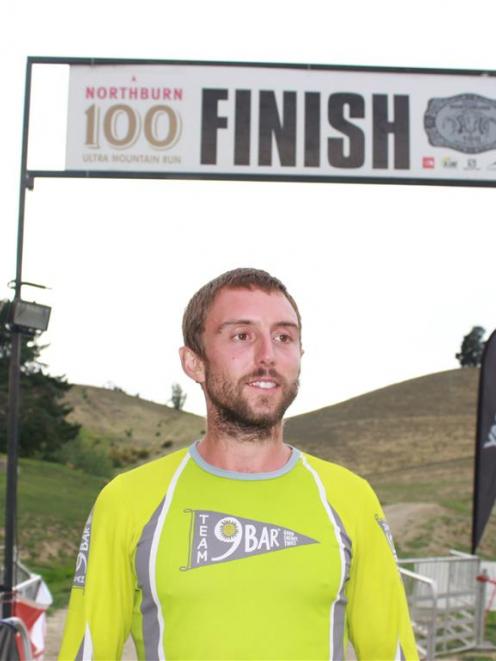 As fresh-faced English running coach Charlie Sharpe rewarded himself with chocolate ice cream yesterday morning, you would not have known he had just run 161km.

His 22h 11min time was two minutes off the record set in 2013 by Christchurch teacher Martin Lukes, although the course was altered this year to include more uphill climbs.

Sharpe faced strong wind gusts which swept him over a fence and also forced him to crawl over a ridge.

"They diverted the course around the ridge after that. I guess I was the guinea pig.''

He loaded up with vegetables, fruit and meat in the two days before, but drank mostly liquids during the race, except for the odd gummy snake.

At one point he became confused by the tracks, which crossed over each other.

"I started running up the wrong trail, so I had to run back.''

This is far from his longest race. He suffered through the brutal 431km United Kingdom slog The Spine.

"It takes about a week. Your time is taken when you get there so whenever you stop, you're just wasting time.''

Sharp arrived in the country in mid-January for a "running holiday'' and won the Motatapu 51km Wanaka to Arrowtown Ultra Run this month.

Race director Terry Davis said the new course made it slightly easier to manage, but it was always hard to set markers along such a huge course.

Although Sharp did not break the record, Mr Davis thought he may as well have as "it was a tougher course, and he looked so refreshed afterwards''.

The wind forced a route change around one of the ridges, he said.

"There were tears, and plenty of expletives about the race director. We didn't have issues with cold weather, which is good for the health and safety of the competitors.''

Jean Beaumont, of Wellington, won the women's section with a time of 28hr 07min, while the 100km distance was won by Richard Pinkney in 16h 23min and Orlaith Heron in the women's in 17h 11min.

Lucy Bartholomew beat the boys in the 50km, coming in at 5h 49min while Paul Timothy won the men's in 5h 52min.

The 161km and 100km events returned after being cancelled last year.