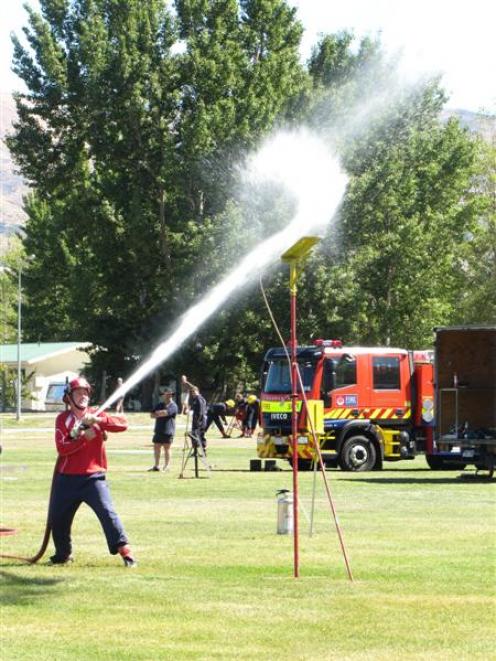 Roxburgh and Cromwell, the only two Central Otago teams represented, were up against teams from Mossburn, Kaitangata, Bluff and Balclutha, as well as two guest teams from Christchurch - Rolleston and Christchurch Airport.

The four-man teams competed in nine events throughout the day, ranging from scaling makeshift towers to knocking down small targets with jets of water from their hoses.

Events were judged on time with penalties awarded for such things as stepping over marks or being too rough on the equipment.

Balclutha took the top prize with 86 points, Kaitangata was second with 82 points and Mossburn was third with 76 points.

The two guest teams competed in their own category with Christchurch Airport coming first on 106 points and Rolleston second with 92 points.

Otago Southland Provincial Fire Brigade president and Alexandra Chief Fire Officer Russell Anderson said the day was the "grand finale" of the competition season, which started in November and included events such as the Road Crash Rescue competition, the Drivers Challenge and the Combat or "tough man" competition.

He said there were 72 brigades in the Otago Southland patch and, though it would have been nice to have had more represented at the competition, eight teams was an average number.

A conference was held the day before which representatives of 35 brigades attended.

Roxburgh volunteer firefighter and member of the Roxburgh team Dan Hobden said the hardest part of the competitions was "keeping up with training and making sure you don't mess up on the day" but "it's good to meet other brigades from around the country and see familiar faces".

His brigade normally trained every Monday night but since January, with this competition in mind, they had been training two to three times a week, he said.

Mr Anderson said the competition would be held in Alexandra next year to celebrate the brigade's centenary.