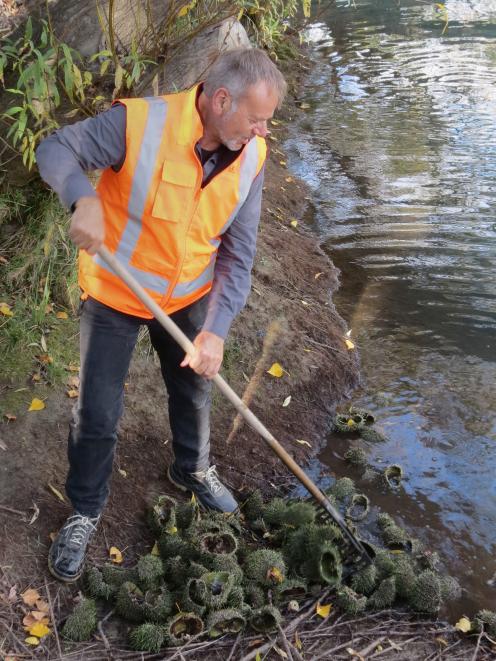 Asplundh contract manager Alan Marshall drags kina shells out of the Clutha River in Alexandra. The Ministry for Primary Industries is asking anyone with information about the dumping to contact them. Photo by Yvonne O'Hara.
The dumping of up to 200 empty kina shells in a popular Alexandra swimming area in the Clutha River has been called ''irresponsible'' and anyone with information about the incident is being asked to contact the Ministry for Primary Industries (MPI).

The shells were discovered on Tuesday by a teenager walking her dog at the edge of a bay about 200m upstream from the Alexandra boatramp.

Another person who saw the shells estimated there were up to 200, both in and out of the water.

''Anyone jumping from the tree and climbing back up the bank would have been hurt, as most of the kina were under water and probably not visible,'' she said.

When looking for the kina, the contractor who cleared the shells also found a deer carcass and a partial sheep or similar pelt in the river.

Land and Information New Zealand (Linz) is responsible for the river foreshore, but Central Otago District Council (CODC) parks and recreation manager Mat Begg said the council arranged for a contractor to remove the kina to help out.

He said the dumping of the kina was unusual and ''not very responsible''.

MPI spokesman Reece Murphy said while the discarding of kina shells on a riverbank ''would not be considered best practice'', there was ''nothing to necessarily indicate a breach of fisheries regulations''.

However, he asked anyone with information about the origin of the kina and the person involved to contact the MPI.

The information would be assessed to ascertain whether any fisheries breaches had occurred, Mr Murphy said.

The limit for kina varies throughout Otago.

Generally it is 50 per gatherer, but in the East Otago Taiapure area a limit of 10 applies.