Clouds sit over Lake Dunstan near the Lowburn Cutting. The site is along a proposed cycleway from Cromwell to Wanaka, and where fencing is proposed to block vehicle access to the lake. Photo: Adam Burns
Proposed fencing at Lowburn for a planned cycleway along Lake Dunstan will take away the ''unhindered access'' provided to Lowburn residents as compensation for the Clyde Dam project, a Lowburn farmer says.

But a Contact Energy spokesman says no formal access agreement was ever established by the Government when Lake Dunstan was formed. 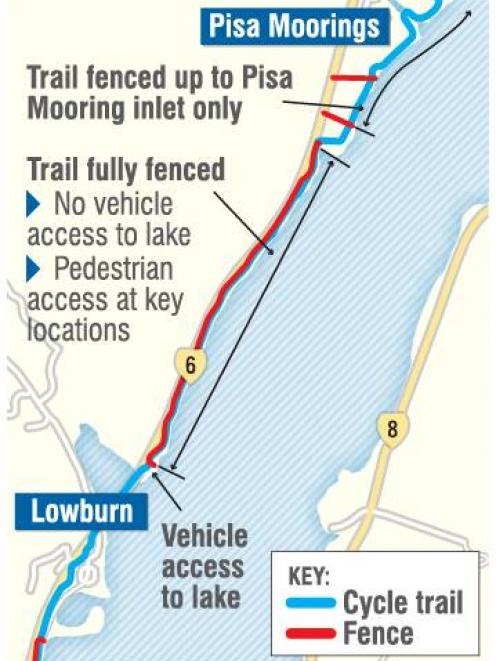 Donald Young, of Te Oma Station, said he was ''angry and perturbed'' to find out areas of Lowburn lakeshore would be fenced off for the planned Cromwell to Wanaka cycle trail.

A recent article supplied by the Central Otago Queenstown Trail Network Trust and published in the Cromwell Bulletin said there would be fencing from Pisa Moorings to the Lowburn Cutting because of a new track being built for the trail.

It would be ''low'' fencing, ''to enable people access but not vehicle access''. Pedestrian access would be provided at ''selected locations'', such as the 45th parallel.

But Mr Young said the fencing would stop ''the free access we all have enjoyed until now''.

''Why not upgrade the existing trail which is used by the local walkers and cyclists, letting the local families still have vehicle access to the shore and shade. In my book our local families must come before any New Zealand cycle trail.''

Mr Young said he was not against the cycle trail, but against fencing in the area.

He said Lowburn residents were promised ''unhindered access'' to Lake Dunstan as part of compensation for the Clyde Dam project.

He said there had been no consultation with Lowburn residents about the proposed fencing, and other residents were also angry about it.

Mr Young said despite the huge growth in campers and vans at the Lowburn Harbour, access to Lake Dunstan around Lowburn had worked well for residents. There was ''a beach area the whole length from Deadman's Point to the Collie Club which is being used and and enjoyed by the local families''.

When approached for comment, Cromwell Community Board chairman Neil Gillespie said he had heard from about a dozen people who were concerned about the proposed fencing at Lowburn.

Others had safety concerns about cyclists and pedestrians using the same trail, or were worried about an increase in the number of people using the Lowburn foreshore area.

When approached for comment, a cycle trust member said trust chairman Stephen Jeffery was the trust's spokesman, and he was unavailable for comment.

But the trust member said feedback received so far about the fencing proposal had been ''useful'' and the articles in the Cromwell Bulletin had been ''worthwhile''.

People can provide feedback at opinion.coqtnt@gmail.com