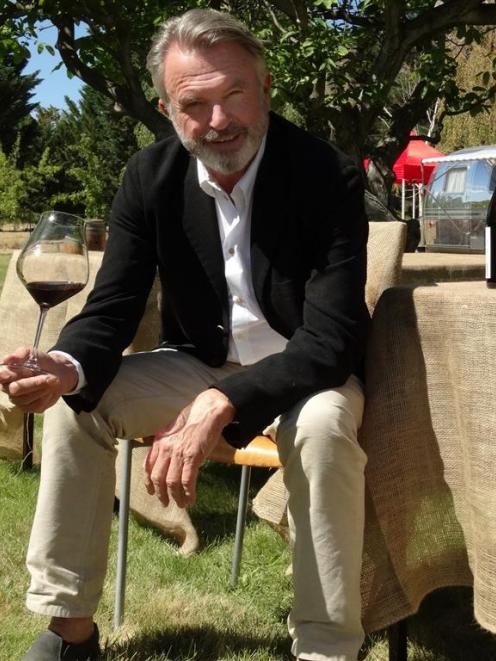 Sam Neill will open a new pop-up cellar today at Bannockburn, focused on a restored Airstream caravan. Photo by Louise Scott.
You could say wine runs in actor and winemaker Sam Neill's veins.

He started off 20-odd years ago with a 2ha plot and never thought it would be anything more than a hobby.

Looking back, he said ambition crept up on him and winemaking was now firmly part of his life.

Speaking to the Otago Daily Times from his vineyard in Bannockburn, Neill said it was part of his family legacy.

His great-grandfather Percy Neill emigrated from Belfast, in the 1860s and settled in Dunedin.

He was a wine and spirits merchant.

"He was importing wine from France. Our connection to wine and Otago has been almost unbroken in all that time.''

While wine was the family business, he is the only Neill to grow grapes in the region.

It was his father, Dermot Neill, who put the idea in his head.

"My father and I used to drive past here [Bannockburn] the same time every year on our way camping.

"It was he who said, 'someone should be growing wine around here. This is perfect wine country'. This is long before the Otago wine pioneers set up.''

Neill planted his first grapes in 1993 in Gibbston. His range has grown over the years and he now owns vineyards in Alexandra and Clyde.

His vineyard at Bannockburn, The Fusilier, is named after, "the old boy'', his father, who served in the Royal Irish Fusiliers.

A paddock beside the vineyard is the setting for his latest project - a pop-up cellar door.

He wants it to be an informal experience, pairing local food and wine.

In his opinion wine "isn't just for the opera''.

"It should be put in your back-pack for a day out, when you are trout fishing. That is what I do regularly.''

Neill thinks the success of Otago wine is due to the people behind it.

"In a global sense we are the new kids on the block. But here [Otago] we never think we are competing with our neighbours.

"We are collaborators, rather than competitors.

"That tone was set by the pioneers. It is about sharing knowledge and a community willing to learn and be innovative.''

For him it is a personal journey and as important as his acting career.

In 2015 he spent time filming in the United Kingdom, playing General MacArthur, in a BBC adaptation of an Agatha Christie novel.

He said many people had the wrong impression of the film industry.

In reality, it is endless nights in hotels, eating bad catering and drinking bad wine.

"Wine and acting entirely complement each other.

"I love nothing more than working in my vineyard.

"It is the opposite of working as an actor. Both are a huge part of my life and I wouldn't be without either,'' he added.

The pop-up cellar door opens today and runs until January 17.