Providing a safe place for children 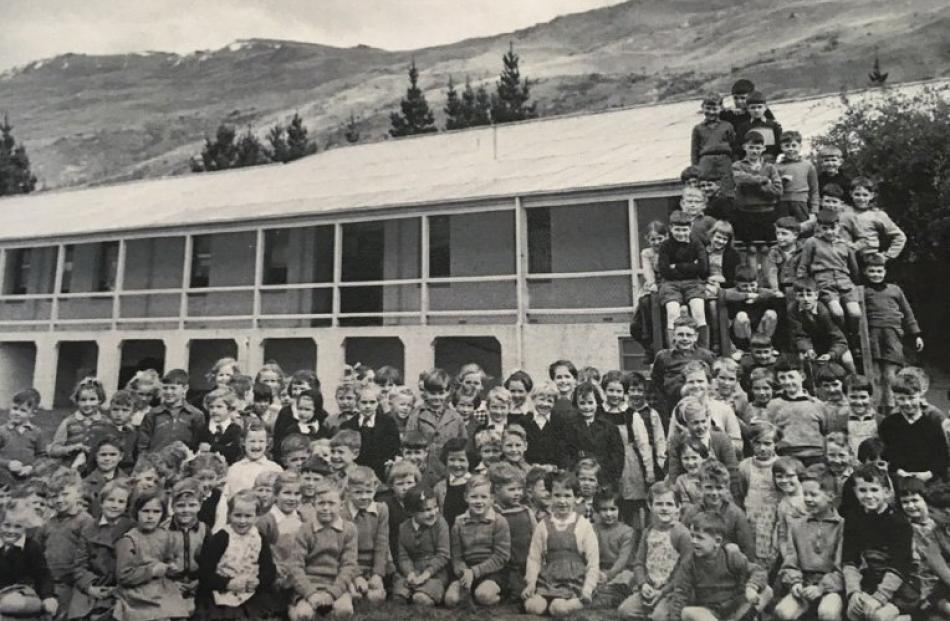 A 1956 photo from The Evening Star shows children at the then Roxburgh Health Camp. The health camp became Stand Children’s Services in 2013. Photo: Supplied 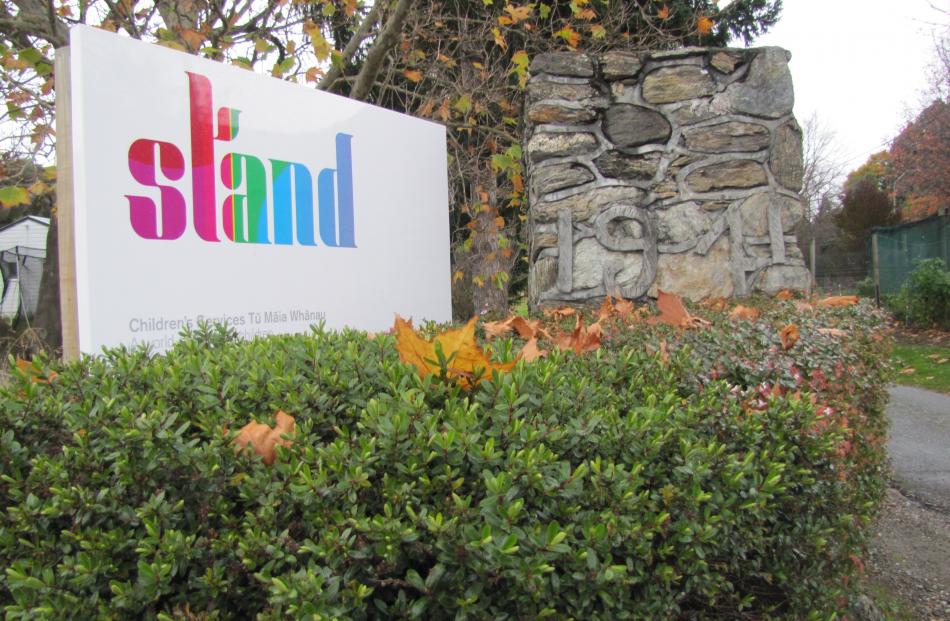 A sign at the entrance of the Stand Children’s Services Roxburgh children’s village is a reminder of the village’s beginning as the Roxburgh Health Camp in 1941. Photos: Pam Jones 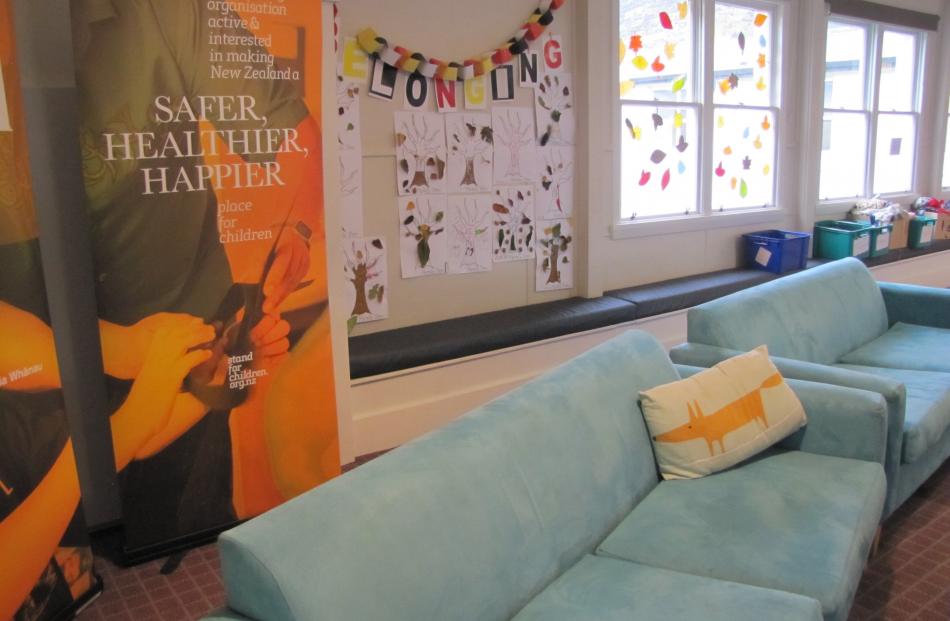 The lounge area at Roxburgh, features artwork by children who have stayed at the village. 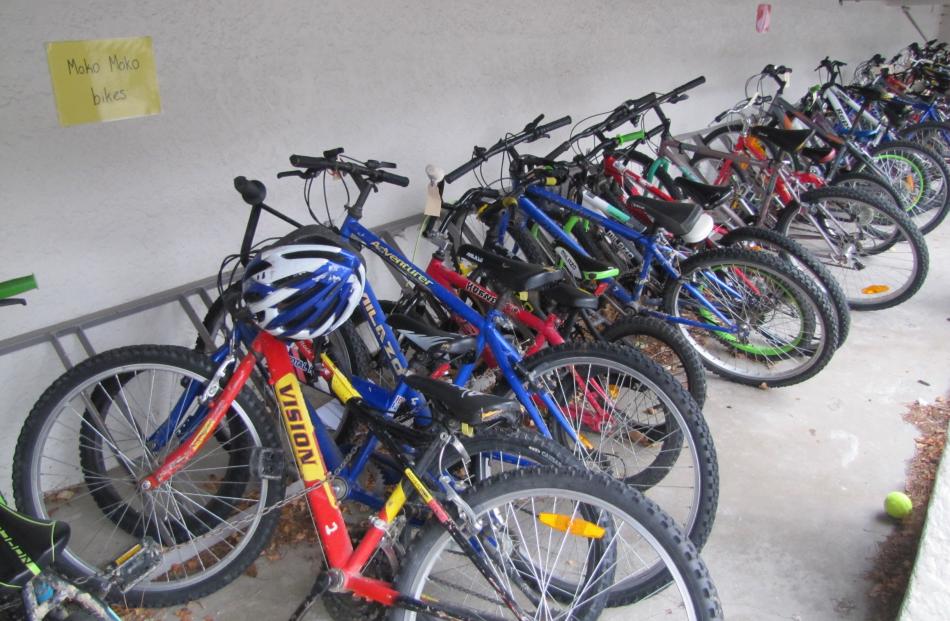 Bicycles wait to be used at the Roxburgh children’s village. 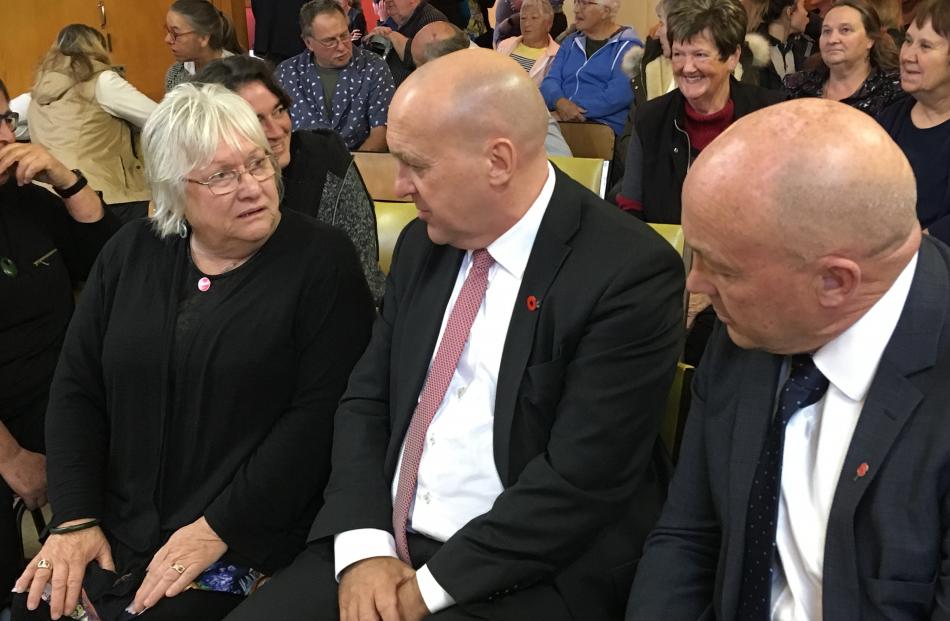 Stand Children’s Services Roxburgh village board member and kaumatua Francie Diver, Central Otago Mayor Tim Cadogan (centre) and Clutha Mayor Bryan Cadogan confer before a public meeting held on May 11 about the village. The closure of the Roxburgh...

The Teviot Valley community and wider southern district has been left reeling from news this week confirming the closure of the Stand Children’s Services children’s village in Roxburgh. Pam Jones takes a look at a service whose users say cannot be replaced, and the pleas to the Government that have been ignored.

In a big open courtyard surrounded by Central Otago hills, a group of boys is playing at the Stand Children’s Services Roxburgh children’s village, fresh air on their cheeks, staff reminding them to stay warm.

"How are you?" Stand Roxburgh operations manager Dwight McDowell asks.

"Mad and sad," one boy replies.

"Because this place is closing," the boy says.

The comment sums up the feelings of all connected to the service and in the Teviot Valley district, not least of all the southern mayors who fought tooth and nail to keep the children’s village open.

Central Otago Mayor Tim Cadogan and Clutha Mayor Bryan Cadogan, who is the chairman of the mayors of Local Government Zone 6, went right to the top in their fight, staking out Prime Minister Jacinda Ardern for three days in Wellington two weeks ago and being allowed only a 25-minute teleconference with her on the third day.

Ms Ardern confirmed there would be no government bailout of the village, or the one in Otaki, which will also close, both at the end of June.

When the closures were confirmed on Tuesday, Tim Cadogan said he felt "physically sick", but said in his heart he knew the closures would go ahead.

"When we got all the way to the top [Prime Minister Jacinda Ardern] last week, and got turned down, I didn’t see how the village could be saved."

But Stand chief executive Dr Fiona Inkpen still had faith, and put her money on all the southern mayors.

"They fought so hard and I was still hoping they would succeed. But they did everything they could. You have very, very, honourable mayors in the southern region, extraordinarily honourable, and they are to be significantly commended. Every single one of them put the needs of children at the top of their agenda."

There has been anger and tears since the possible closure of the Roxburgh village was announced last month, significantly so during a public meeting held on May 11 in Roxburgh to try to halt the closure.

There was a not a dry eye in the house as a young girl, her mother and younger brother, who were midway through a family programme at the Roxburgh village, took a turn at the lectern.

The girl said the Roxburgh service had changed her life, and was "the only thing that helped" her.

The mother said the children’s village had turned them into "a saved family".

Another statement read from an adult who had used the village, previously known as the Roxburgh Health Camp, said "The health camp gave me a childhood. Without it, I wouldn’t have known what that was."

Waitaki MP Jacqui Dean gave an impassioned speech about the Roxburgh village closure in Parliament this week, quoting from the young girl’s speech.

She cast shame on the Government for breaking its promises to look after children, her sentiments echoed by all those angry about the closure (even though most also acknowledge it was the National Government which had not given Stand a funding increase for nine years and contributed to its financial position).

But if today’s Government was going to break one of its promises, Roxburgh staff member and New Zealand Public Service Association delegate Carol Hastie said at the public meeting, let it break the one about sticking to budget constraints — not the one about looking after the children.

The emotion has run alongside the reality of the cold, hard figures that have led to the closure of the Roxburgh and Otaki villages.

Stand receives $20.2 million annually from the Government, $16.5 million of which goes to its intensive, wrap-around, residential services (Stand operates another five residential villages in New Zealand, as well as the ones in Roxburgh and Otaki).

The other $3.7 million is spent on other social work and family therapy services, which are not available in Otago or Southland.

Stand needed another $3 million a year to keep the Roxburgh and Otaki villages open, having used up all its reserves — almost $30 million from its asset investment fund over the past 10 years.

The increase in operating costs at the Stand villages was partly due to increases in salaries which had to be implemented last year.

When asked if the increases were the right move, if they had  contributed to the closure of the villages, Dr Inkpen said they had no choice but to make them. Stand salaries were so low that staff turnover at the villages was becoming unsustainable — 40% nationally last year.

But somewhere in the middle of all of this is a disconnect between what those connected to Stand are telling the Government, and what the Government says is the case.

What is undisputed is the Stand Roxburgh village is the only residential, intensive, wrap-around trauma treatment service available for children south of the Waitaki, taking in nine intakes a year of up to 21 children aged 5-12, who stay for five weeks at a time.

Additional family residential services, and follow-up residential stays for children who have already been at Stand, are also provided at the Roxburgh village.

It is the residential nature of the service, being able to take children out of their home, that is its point of difference, and that service has now been lost to southern children. They will not be able to use the only other Stand village in the South Island, in Christchurch.

But the Government maintains there are other services that will care for the children who went to the village.

Ms Ardern has refused to comment about the Roxburgh service, passing the buck to Minister for Children, Tracey Martin, who said Oranga Tamariki would monitor the children who would have gone to the village.

Dr Inkpen said Stand would continue its positive relationship with Oranga Tamariki (its major direct funder), but said children would suffer from the closure of the villages, and fall through the cracks.

Luckily, most people cannot imagine the kinds of trauma a child has to experience to be referred to the intensive, residential treatment programme Stand villages provide, but Dr Inkpen described it like this:

"There are times when a child is so damaged by childhood experience, and they hurt so much, and they fear adults so much, that they can’t function in their world, and coming to a place that’s totally safe with adults who can be totally trusted ... you see the sense of safety emerge."

She repeats the things children who have been helped by Stand tell her they learn in the villages.

"I can learn and I can be safe in the world. I can trust adults. Life can be good, I should give it another go. I can do things I didn’t know I can do. I can make friends, and actually have value. I know how to keep myself safe in the world."

For children who had become isolated; whose very families and schools might have lost belief in them because of the "entirely predictable ways" in which they are behaving due to the trauma they have experienced; whose bodies and minds were consumed only with survival, unable to exit fight mode and learn how to express feelings or learn life skills; the residential children’s villages were life-changing, Dr Inkpen said.

She was also in tears, reflecting on the children she would now be unable to help.

For now, she was focused on the services Stand would still be able to provide, and starting to think about how residential Stand services in the south could be reinstated.

She wanted to work with local communities and the Government to see how that could be possible, but did not say whether a reinstated service would be in Roxburgh again.

Meanwhile, the 27 people who work in 31 roles at the Roxburgh children’s village have been served with redundancy.

Representing about 5% of Roxburgh’s population of 520, they are devastated, concerned firstly with children’s welfare, but also anxious about their own futures.Back in 2009, a public protest drew 300 people to march in Roxburgh when the service was threatened, after which the then government approved an additional $1.5 million of annual funding for the country’s seven health camps, including Roxburgh’s.

Teviot Valley residents, southern mayors and other advocates for the Roxburgh district and southern children say they are prepared to keep fighting to reinstate the Stand service to where it started in 1941.