Rain welcomed in Central but caution on drought 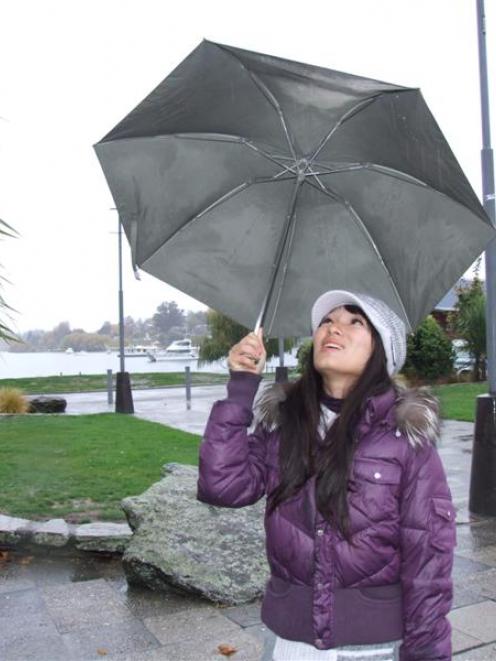 Tourist Sienna Chin, of Taiwan, shelters under her umbrella at Lake Wanaka. Photo by Matthew Haggart.
It took two or three successive dry years to make the current drought, so it will take more than one significant rainfall to ease the situation - that was the message yesterday from Central Otago farmers.

Steady rain throughout the district most of yesterday and on Sunday evening was welcomed by farmers, but those contacted by the Otago Daily Times warned it took more than one rainfall to break a drought.

According to rainfall statistics kept by farmers, Roxburgh East had received 28mm of rain by 2pm yesterday.

With more rain forecast later this week, it would be good if warm weather followed the rain, to prompt some grass growth before winter, several farmers said.

Richard Anderson, of Kawarau Station at Bannockburn, described the rain as a godsend.

"Although we're used to not much rain, we were starting to struggle," he said.

"It probably would have done us more good if it fell a month ago, but we're not arguing."

Graham Sinnamon, of Poolburn, said the slow, warm rain was good news as it was "almost 12 months since we last had any rain to get excited about".

"We've had to wait for it and be very patient, but at least this lot won't evaporate quickly the way it would if it had fallen in summer."

"It will take a long time to fill the irrigation dams up again and if it keeps raining, this is a good start."

Roxburgh East farmer Jeremy Wales said it was "glorious rain - it's late in the season, but we'll take it."

"This will certainly make a difference for us, although let's not forget we've had a couple of dry seasons leading up to this point."

Drybread farmer Tony Glassford said although it was late in the season, the rain was welcome.

"It's the first decent rain for ages and long overdue. I can see the dryland picking up already, with some green patches."

"Probably we've got just enough to keep us going and hopefully we'll get a little bit of grass growth before winter.

"What we need now is for it to stay warm. If it's followed by frosts then the rain won't do as much good because it'll be too cold for grass growth."

It was good news that the rain was widespread across the district, Mr Glassford said.

• Gentle rain was welcomed by farmers in North Otago. By 3pm yesterday, 10mm had fallen on the coast just south of Oamaru in the previous 24 hours, with 11.5mm recorded at Clifton Falls and 16.5mm at The Dasher.