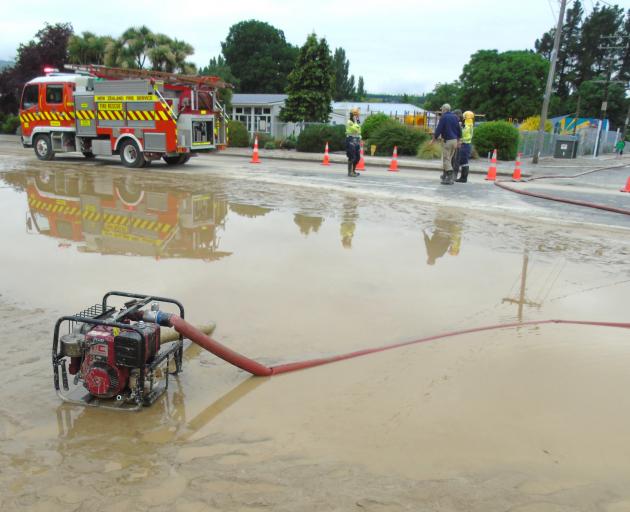 There may be more muddied waters ahead for Roxburgh as work to upgrade some culverts is yet to begin.

A report by the Otago Regional Council (ORC) recommended investigating capacity upgrading for three culverts, but the NZ Transport Agency (NZTA) says work might not happen until 2020 or even 2021.

Otago regional councillor Gary Kelliher said he was surprised the agency was reacting so slowly, leaving Roxburgh to ‘‘suffer ongoing works’’ for some time.

Roxburgh has been hit in recent years by severe flooding, including a flash flood on November 2017 which caused major landslips and affected all three routes into the town.

Last November, more than 50mm of rain fell and flooded areas including the golf course, only weeks after restoration work was completed from the previous year.

The ORC completed an engineering options report in July last year on the management and reduction of the debris flow risk in Roxburgh, recommending culverts at Pumpstation Creek, Golf Course Creek and Black Jacks Creek be further investigated for capacity upgrading.

NZTA senior network manager John Jarvis said detailed investigation and design work was under way to upgrade up to three culverts on State Highway 8 near Roxburgh.

The design work was expected to be completed before April 2020, which would enable the agency to seek funding to start construction in 2020-21 for at least one of these sites, he said.

Mr Kelliher questioned if enough was being done to reduce future flood risks in the town.

Given the scale of the previous flood events and the resulting clean-up, it was ‘‘surprising’’ that the NZTA was ‘‘reacting so slowly’’, he said.

Cr Kelliher appreciated funding was an issue for many projects, but if it had been shown there was a deficiency he thought all three culverts should be upgraded ‘‘at once’’.

‘‘They obviously have pushed it down the priority order and that would concern me.’’

Although Cr Kelliher had not looked at the detail concerning the effect of each of the culverts, fixing the ‘‘entire issue’’ rather than in a piecemeal fashion seemed preferable.

‘‘I would hope for the township of Roxburgh that they aren’t going to have to suffer ongoing works one culvert at a time, one year at a time or more,’’ he said.

Mr Jarvis said work had been done to strengthen the shoulder at Black Jacks Creek with concrete and rock buttressing, and a redundant culvert immediately upstream of Golf Course culvert ‘‘that was causing a significant constriction for high water flows’’ had been removed.

Teviot Valley Community Board chairman Raymond Gunn said progress had taken a while but he was pleased to see it looked as if the NZTA was getting closer to resolving the issues.

‘‘It is good to see something is happening, really.’’

The culverts had been the main cause of road closures during flood events in the past so they did need to be looked at, he said.

‘‘I’m pleased the NZTA have decided that they do need an upgrade because originally they hadn’t said that.’’