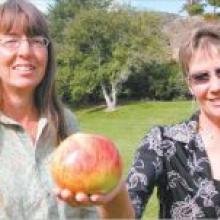 An apple a day: Helen Hillis (holding a Peasgood Nonsuch apple) grows as much of her own produce as she can and will share her experiences of living
Living off the land could drop your grocery bill to only $25 a week to feed three people.

A guide to frugal living is one in a series of sustainability workshops being held by Central Otago Reap (Rural Education Activities Programme) during the next three months.

Series co-ordinator Clair Higginson said a recent national survey showed New Zealanders had widespread concern for the environment and were hungry to learn more about how they could make a difference in their own homes.

‘‘This series of workshops aims to provide information for all those people thirsty for knowledge, hopefully telling them all the things they wanted to know but were too afraid to ask,'' Ms Higginson said.

‘‘I've been trying to make all my favourite foods from scratch as much as I can, trawling through recipe books and studying labels on supermarket shelves,'' Mrs Hillis said.

‘‘Some things have worked out and some haven't,'' she said.

Her exploration of food had extended to growing unusual vegetables and fruits, making nut milk from nuts grown on her property and making her own cheese- ‘‘it cost me more to make camembert than to buy it on special at the supermarket, so I won't bother doing that again.''

‘‘It's so easy to grab food off a supermarket shelf ready-prepared but, living frugally, it's surprising how much you can make yourself,'' Mrs Hillis said.

Marie Gale, of Clyde, will present workshops on organic gardening, together with Debbie Robb.

‘‘I do avoid using chemical sprays on food.''

The workshops began this month and will continue in April and May. - The sessions are based in Alexandra and Cromwell and bookings can be made through Central Otago Reap.