Trip over but journey continues 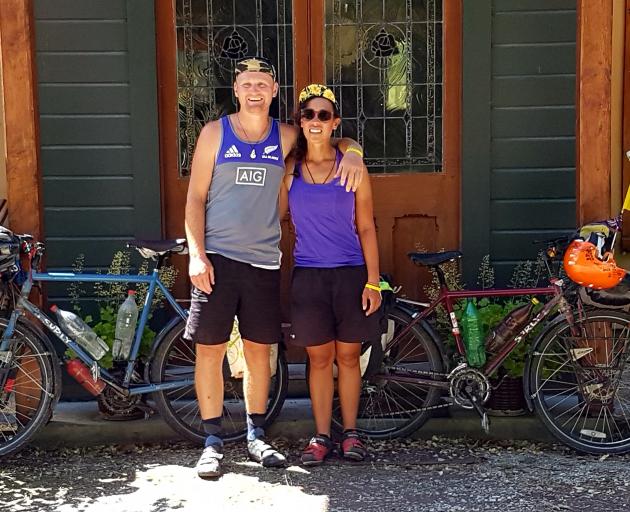 After three years away from home and 541 days biking around the world, Cameron Smith and Monique Nees returned to Mr Smith's parents' home in Alexandra just before Christmas. PHOTO: SUPPLIED
It's back to normal life for Alexandra couple Cameron Smith and Monique Nees, who have returned home and are settling into the daily grind after 541 days of biking around the world, raising awareness and money for suicide prevention.

After their visas expired, instead of returning home they cycled through 33 countries in Europe, Asia and Australia.

The couple lost high school friends and cousins to suicide and they did not believe the way media and schools talked about suicide was adequate.

So they turned their world bike journey into a discussion on suicide.

They sold merchandise with their "KiwiBums on Bikes'' brand to raise money and started a Givealittle page, which will finish in February.

In September, they arrived back in New Zealand and began a three-month cycle journey from Cape Reinga to Bluff.

After completing the journey they cycled back to Alexandra, reaching the town on December 23, just in time for Christmas.

They had not returned to New Zealand since they left for London.

"It's funny; when you grow up around here, all you want to do is leave,'' Mr Smith said.

"Then you sort of get to a certain age and all you want to do is come back.''

Part of the plan during the three-month New Zealand trip was to talk to school pupils about suicide. However, they found it difficult to get a foot in the door at many schools, as there were limits on what they could talk about with pupils.

"We had problems with a lot of schools saying `sorry, we can't take you'. We would've had to base our talk around mental health and wellbeing,'' Mr Smith said.

But they did talk to many people on their travels around New Zealand about suicide.

"People know about suicide, it's been talked about so much,'' Miss Nees said.

"It's more showing people the ways through it and where to go, to promote what other people are doing and to help pathways to help yourself or a friend.''

"We always put the link that mental health should be talked about like physical health,'' Mr Smith said.

"If I was at rugby and I broke my leg, I'd tell my mates how I break my leg and how much it sucks. There should be a link to mental health with the same openness.''

The end of the trip was only the start of the couple's goal - to help people discuss mental health openly.

Last weekend, Miss Nees moved to Dunedin to complete a master of teaching. She has a degree in applied science, specialising in health and wellbeing.

Mr Smith will stay in Alexandra for the year and work in Cromwell as a plumber and gasfitter.

"The old piggybank needs me to be back at work. Months without working has taken its toll but I'm enjoying being back.''

Miss Nees said the mission would continue with education.

"If you want to change people's thoughts, you start with education. It doesn't matter if you're teaching children ABC or how to plough their rice field, education's always key.''