Worms may be answer to effluent 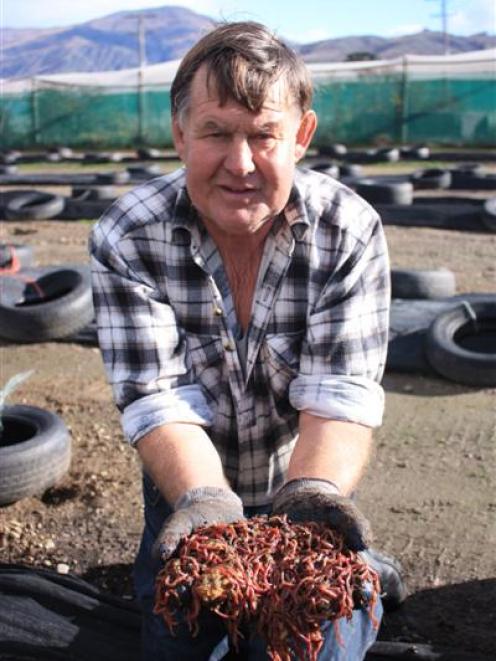 During a demonstration at Central Wormworx worm farm in Cromwell yesterday, representatives from Environment Southland, the Department of Conservation and All Waste were shown trials testing worms' ability to convert dairy effluent into an environmentally-friendly usable product.

Wormworx owner Robbie Dick said the demonstration was an opportunity to raise awareness of the process and its environmental and financial benefits.

''The dairy shed waste will be de-watered. The water goes on the paddocks and the solids are fed to the worms, which then break it down into an excellent soil conditioner which can be applied to the paddocks to improve yield,'' Mr Dick said.

''It is more environmentally friendly to produce this than put it on the paddock in a raw form.''

Through the process, nitrates were removed from the final product, worm castings, which had high water retention qualities so helped prevent water run-off during rain, he said.

On a hectare of land being used as a worm farm, worms could process about 2500 tonnes of effluent solids per year.

For every tonne of effluent, there was about a 60% return of usable worm castings.

When applied to paddocks, they helped improve grass quality, he said.

An Australian study had found worm castings to be 15-20 times more effective than compost, with less risk of crop failure, Mr Dick said.

Environment Southland dairy liaison officer Russell Winter, of Invercargill, was at the demonstration to look at it as an option for dealing with solid waste from dairy farms.

For farmers to adopt the practice, it would need to be economically viable, Mr Winter said.

''Dairy farmers will be cautious but I think there will be some out there who will be keen to set it up and trial it,'' he said.

He did not think it would be viable for an individual farmer to operate a worm farm operation, but a centralised facility serving several farms might work.

Mr Dick also said a centralised facility would be more effective, as farmers did not have time to operate their own.

Setting up a worm farm facility would cost about $250,000 per hectare, including machinery, a watering system, worms and other infrastructure.

Although there were about 4000 species of worms, only seven were suitable for composting, including tiger worms, which he used, Mr Dick said.

A kilogram of worms could consume the same weight in waste per day, he said.