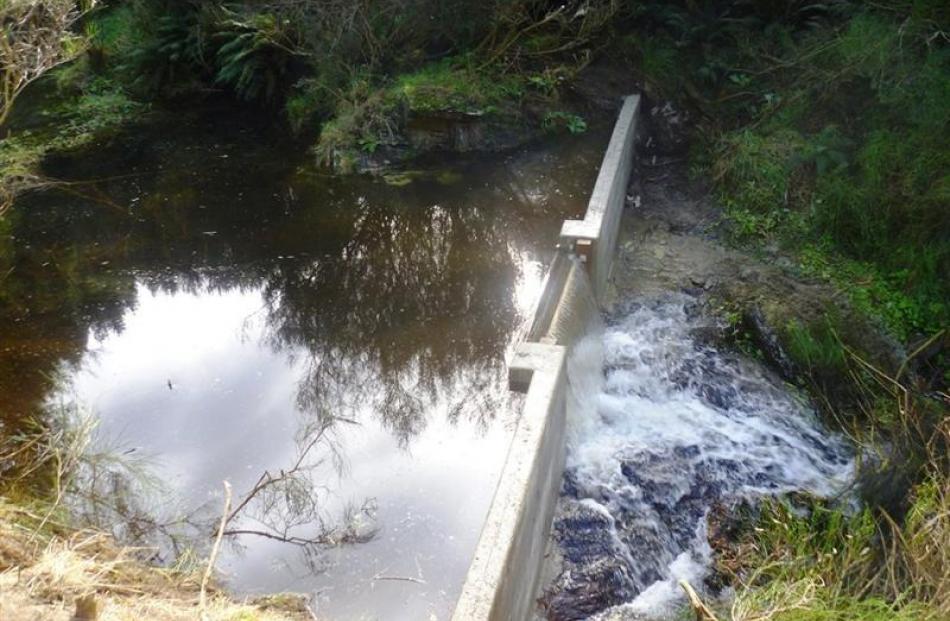 Concrete weirs such as the one at Akatore Creek near Waihola keep trout from preying on Otago's endangered native galaxiids. Photo from DOC. 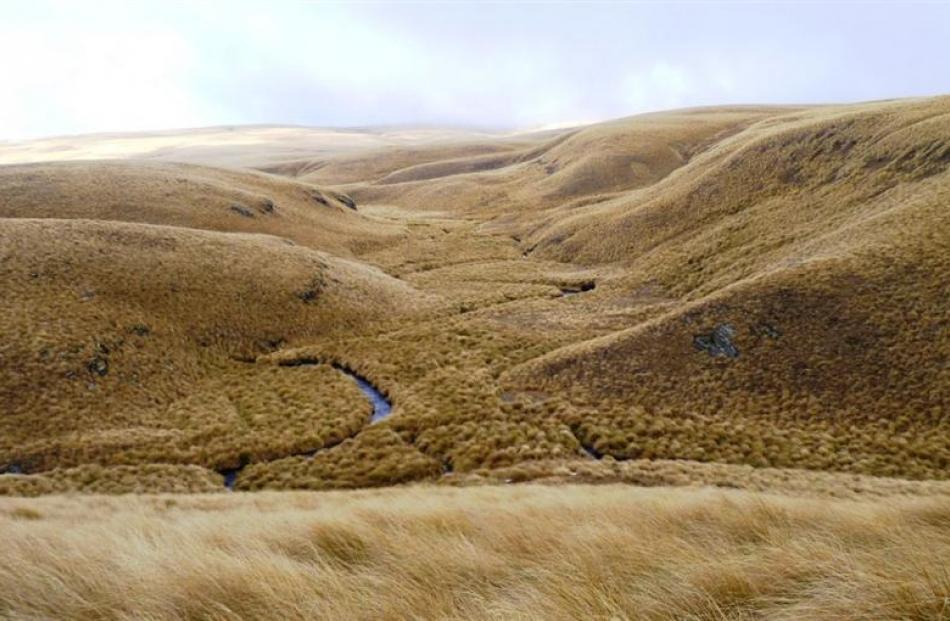 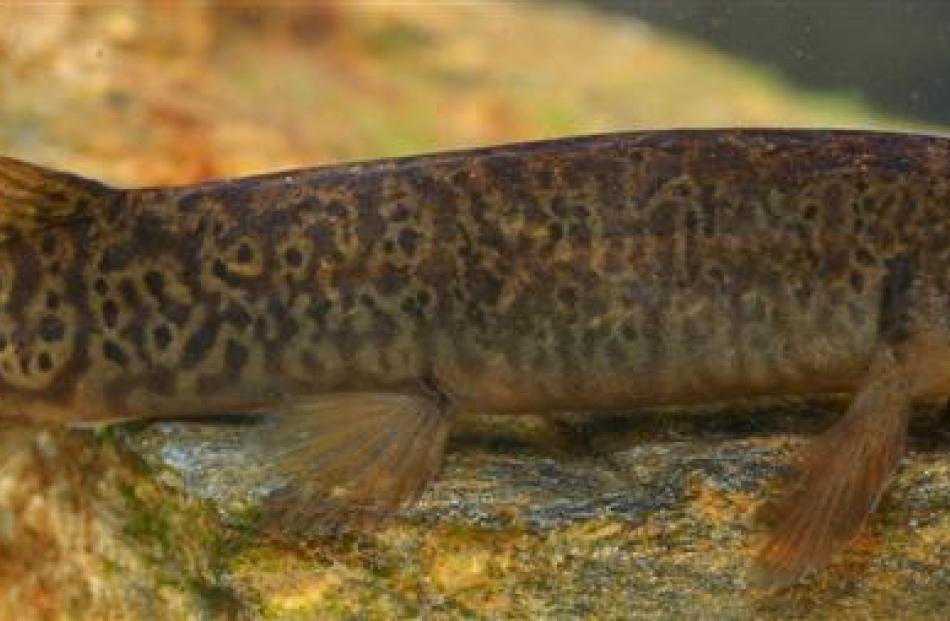 The dusky galaxiid, found only in Otago, shares the same threat status as Hector's dolphin. Photo by Simon Madill. 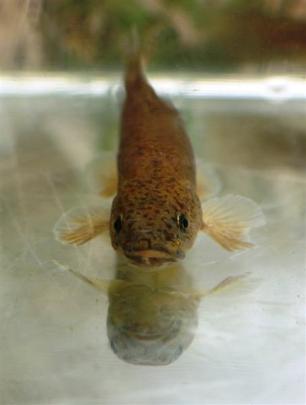 As rare as the kakapo, Teviot galaxiid fish are found in just a handful of remaining populations around Lake Onslow. Photo by Simon Madill. 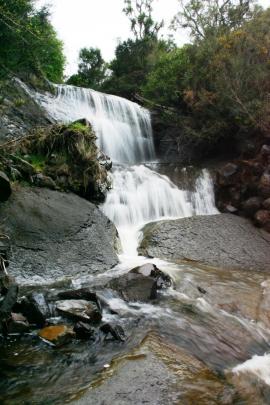 The natural waterfall at Whare Flat, which keeps trout from preying on Otago's endangered native galaxiids. Photo from DOC.

The disappearance of 25% of Otago's unique small fish in the past decade means trying to save those remaining is ''finger-in-the-dyke stuff'', the Department of Conservation warns.

Of the 28 galaxiid species in New Zealand, 12 are unique to Otago's streams but their numbers are declining rapidly.

The species' fate is so dire their listing on New Zealand's threat classification system is likely to increase to nationally critical, making the Teviot galaxiid as threatened as the kakapo.

''We can't not fight for them. They're in such a bad state we've to go in and defend them the best we can with what tools we have available,'' Doc freshwater ranger Pete Ravenscroft said.

The main threat to the fish in the past 10 years had been trout, he said.

''There's no debate about that. We've just got to find how to stop it.''

He was quick to point out Doc was not anti-trout. In fact, under the Conservation Act, it had to protect them.

It was about protecting the populations of galaxiids left and as their preferred habitats were not in the major trout-fishing rivers, fishermen should rest easy, he said.

''There is room for galaxiids, farmers and trout. We just all have to be flexible.''

Other factors were involved in their demise, including water quality and quantity, gravel extraction and willow removal.

The problem now was there was less room to compromise as the populations decreased or disappeared altogether. Four of 17 Eldon's galaxiid populations had gone, seven of 24 populations of dusky galaxiids and at least one of seven populations of Teviot galaxiids had, too, he said.

As a result, there were rivers and streams previously inhabited by galaxiids that were now empty.

Another factor was that 90% of the remaining galaxiids, such as the Central Otago roundhead, were not on the Doc estate.

Of the 38 known Central Otago roundhead populations, 11 had become extinct in the past five years, 14 were ''dead-man-walking'' populations, sandwiched between trout populations, and six lived in areas smaller than 100sq m.

Added to that were the unknown populations where Doc had not been granted access to land - leaving Doc with only three ''secure'' populations.

''We're totally reliant on the goodwill of landowners.''

Part of Doc's response to the threat to galaxiids was the Growing Otago Galaxiid project, aimed at getting communities, farmers and schools ''in the know'' about galaxiids.

Doc ranger and project co-ordinator Lan Pham said many landowners did not know they had galaxiids in their streams so it was about raising the profile of the fish and keeping people informed about galaxiids.

''These fish are uniquely Otago, they're special, and given the opportunity to be involved, everyone is keen.''

They had started with communities in Kakanui, where the long-jaw galaxiid lived, Ranfurly, which was home to the Central Otago roundhead, and Lawrence, where the lower Clutha flathead lived.

For many farmers, discovering galaxiids in their streams meant nothing more than taking care with farming practices along those waterways.

Mr Ravenscroft said working with Fish and Game had allowed Doc to protect some populations by constructing barriers so trout could not reach the galaxiids.

In one case, after trout were found in a Taieri flathead population, Doc put in a concrete weir and removed the trout.

''There was an immediate response in the population. It's dramatic and quick.''

In another, trout were removed from a 700m section of water race after trout got in from an irrigation pond. They electric-fished 400 trout out of the race and would soon return to see how the galaxiid population had grown.

Fish and Game council chief executive Niall Watson said trout were introduced to New Zealand in 1864 so there was ''no turning back the clock''.

Trout feeding on galaxiids was part of the natural ecosystem, just as shags or other birds feeding on trout was.

''Where it gets difficult is non-migratory galaxiids can't compete with trout.''

Fish and Game was supportive of Doc's efforts to protect galaxiid refuges in the region's small streams and had a formal understanding to manage trout in those situations.

''In several situations we have, we have agreed to the removal of trout from those habitats with threatened galaxiids.''