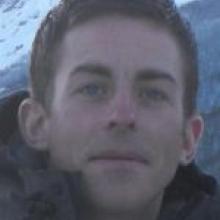 Paul Hignett
An English snowboarder is lucky to be alive after he strayed off the Coronet Peak ski slopes and was missing for more than six hours.

Millbrook restaurant manager Paul Hignett was found, soaking wet in a creek, by a police search and rescue team using a helicopter equipped with night vision gear at 11pm on Tuesday.

He said he was lucky to have come out unscathed.

"If they hadn't got me when they did, I'm not sure I would have made it through.

"They were amazing. I'm thankful because they pretty much saved my life."

Constable Julian Cahill, one of six police involved in the search, said had Mr Hignett spent the night in the subzero temperatures, his chances of surviving were slim.

Mr Hignett, who had appropriate clothing, was found "cold and saturated" in Dirty Four Creek.

"He was pretty excited to see us and come climbing up at speed."

The alarm was raised when two companions, Martin Hamilton and Nikki Shrimpton, reported Mr Hignett missing at 4.30pm, just as cloud and fog began to settle on the mountain.

The 33-year-old had taken the wrong turn on the Greengates slope, on the western side of the mountain, and ended halfway down to Skippers Rd.

He had been snowboarding down the Greengates when he "ended up going off-course by accident" and, by the time he realised, he had gone downhill too far to recover.

"One kilometre had passed and rather than hiking up, which would have taken an hour, I rode down."

"There were times when I was looking at 50m drops."

When Mr Hignett reached the creek, it was getting dark, so he built a snow cave from tree branches, to help him keep warm.

The helicopter search began at 9pm and searchers used night vision equipment to follow tracks thought to be Mr Hignett's.

He was later treated to a meal by Millbrook chef and friend, Russell Heron.

Mr Hignett's experience has not put him off the mountain.

• On Sunday, a Christchurch woman became lost after taking a wrong turn and endured a 10km, five-hour trek to reach a farm house.