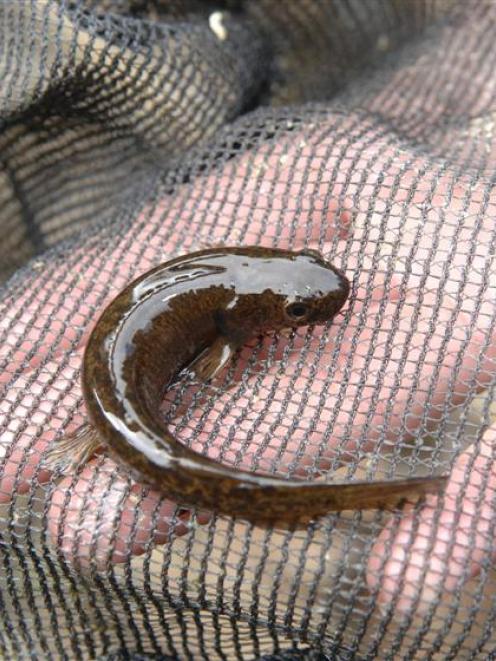 The fish, mostly galaxiids from Otago and Canterbury, are under threat from the increasing demands for water, declining water quality, introduced fish, and land-use change, the study recently published in the New Zealand Journal of Marine and Freshwater Research said.

Ecologists, scientists and Department of Conservation staff from around the country contributed to the study, which said the majority of non-migratory galaxiids and mudfish in small streams and wetland habitats were slowly being lost.

Without action to maintain and expand these species, they were expected to become increasingly threatened and the possibility of extinction became likely soon, it said.

"A serious effort is now required to reverse the decline in native freshwater fishes."

It ranked 51 species of native freshwater fish of which 67% were considered threatened or at risk, up from 53% five years ago.

Of those threatened or at risk, 68% were galaxiids and most occurred in the Otago and Canterbury regions where a range of rare non-migratory galaxiids (small fish that grow between 35mm and 270mm long) exist.

"The status of these fish is exacerbated by the increasingly high demand for water in Central Otago and Canterbury, including the development of the Clutha, Taieri and Waitaki river catchments for hydro-electricity generation, increases in irrigation and changes in land-use activity."

Department of Conservation Coastal Otago freshwater ranger Pete Ravenscroft, who contributed to the study, said these species were part of New Zealand's biodiversity, and part of what makes the country unique would disappear if they were lost.

"Things aren't looking good, but it is the reality of the situation. It [the study] truly reflects what is happening."

He was most concerned about the lower river level threat posed to high-velocity fish such as bluegill bully and torrentfish, found throughout the country, from irrigation and land-use changes.

"It all indicates we need to manage rivers as a whole ... and it's not down to just one organisation.

"It's not just Doc or Fish and Game or the regional council, it's the community as a whole."

The biggest risk to Otago's non-migratory galaxiids was introduced trout. Species such as the Eldon and dusky could not co-exist with them, yet trout invasion continued, he said.

"We can't go back to 100 years ago, but we can halt the decline if we work collectively."

The study said since 2005, the risk ranking of eight species had increased, including Otago's Teviot, dusky and Eldon galaxias.

The Kakanui River lowland longjaw was one of the four species ranked nationally critical and while it was undergoing significant conservation effort, no secure populations existed.

"For all four ... the lack of formal protection for their habitat is of concern and, if habitat and population losses continue, all four ... are expected to continue to decline towards extinction."

Despite the increasing concern over the state of fresh water and increased recognition of the impacts, little success had been made in halting the decline of the threatened fish, the study said.

"Protection mechanisms such as conservation or reserve status do not eliminate threats."