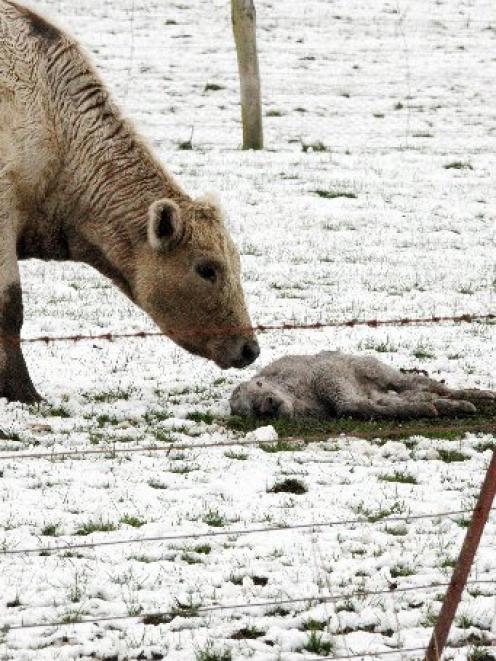 A cow stands over its dead calf in a snowy paddock near Owaka on Saturday. Photo by NZPA.
The weekend's unseasonal icy blast that caused the collapse of Stadium Southland in Invercargill and wreaked havoc across Southland has also hit some Otago orchardists and farmers hard.

Newborn lambs had virtually no chance against the elements on Saturday because of the wind chill, he said.

Luckily, many late-lambing farmers were due to start today and the losses would have been much worse had the blast hit in a few days' time, he said.

However, with further bad weather expected, new lambs might not be out of danger yet.

MetService predicted more snow in South Otago and Southland today, with falls easing by this evening, when westerly gales are expected.

For the rest of Otago and Dunedin, the forecast is mostly fine with scattered showers.

The weekend storm struck in the middle of lambing in most of Otago and South Otago - the worst possible time, Slinkskins Ltd manager Ray Watson said.

The company tours rural areas collecting dead lambs, which are skinned and the hides exported.

But, with roads closed around most of coastal Southland and South Otago and farmers unable to get around all their lambing ewes, Mr Watson said the extent of the deaths would not be known until later today.

The cold snap also has meant long nights of frost-fighting for Central Otago orchardists, with frost alarms going off unusually early in the evening.

Fruitgrowers expect to be frost-fighting this time of year and alarms usually awake them in the early hours of the morning.

With a fresh dusting of snow on the hills and temperatures dropping, orchardists were called out earlier than usual to frost-fight to protect budding trees on Friday and Saturday nights.

"The alarm went off at 8.30pm on Saturday and that's the earliest in the evening we've had an alarm go off since 1969," Summerfruit New Zealand chairman and Roxburgh orchardist Gary Bennetts said.

"On Saturday there was snow down low - right to the road - after a snow shower that afternoon, and it must have cooled off quickly that evening."

The snow did not stay long but orchardists had sleepless nights on Friday and Saturday making sure the fruit blossoms on their trees were protected.

South Otago farmer Pete McNab said he lost about 10 newborn calves and revived another dozen after picking them up from paddocks.

Mr McNab, who farms about 20km northwest of Owaka and starts lambing today, said the timing of the blast meant his lambs were spared.

Saturday was a "nasty, nasty night", with a virtual whiteout and the wind-chill dropping the temperature to about -10degC.

In Southland, the snow meant trouble for dairy farmers, many of whom were forced to jettison thousands of litres of milk because tankers were unable to reach up to 500 farms.

Access to Fonterra's Edendale plant was also restricted because of the snow, and some milk that was picked up was diverted to the company's Stirling plant near Balclutha.

Between 400 and 500 Southland farmers were affected, but it was too early to say how much milk had been dumped, Mr Mason said.

Some farmers could store their milk, but others would be forced to tip it out.

While farmers were still paid for the milk, it was upsetting to see it wasted, he said.

Between 5cm-10cm of snow fell on Southern skifields on Saturday night, topping up the 30cm-40cm which fell late last week.

The variable weather caused Treble Cone to cancel its annual Triple Comp but the Mini Mountain event for under-13s went ahead as scheduled.

Roads in the South remained dangerous, with ice forming on surfaces from Southland to Milton.

The Southern Scenic Route in the Catlins, between Owaka and Niagara, remained closed last night, but the Clinton-Mataura highway reopened yesterday and Milford Rd was reopened for a time in the afternoon, although chains were required.

The Crown Range and Lindis mountain passes were open and clear, although the usual winter travel advisory to carry chains still applies.