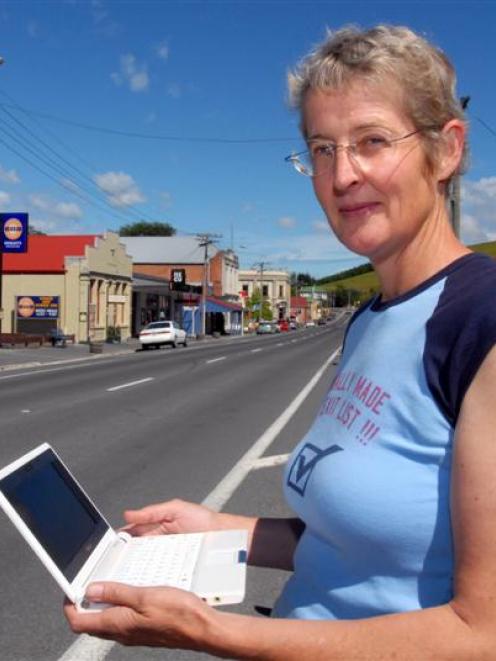 Lawrence woman Nina Arron prepares to use her laptop in the main street of Lawrence. Photo by Gregor Richardson.
Lawrence, famous for its 1860s goldrush, will soon make 21st-century history by becoming the first small town in the country to offer free wireless Internet for locals and visitors to its main business district.

The inexpensive move - believed to cost less than $1000 - will mean anyone with a computer or laptop in the central business area can surf the Internet free of charge.

Lawrence couple Frank Buddingh and Nina Arron are behind the move, which also has the financial backing of Lawrence businessman Jim Robertson, who is paying for two mini relay stations to be set up at each end of Ross Pl and covering the $65 monthly access charge.

Internet provider Scorch Communications will erect a transmitter nearby next Monday and Ms Arron said she hoped the two nano-stations would be in place soon after.

She hoped the free service would be operating following initial testing.

The nano-stations picked up the transmitter's signal and then relayed it between two points.

It was simple and cheap technology, Ms Arron said.

The couple, familiar with having reliable, high-speed and cheap Internet service after living in the United States, said they were continually frustrated at the poor service in New Zealand.

More and more people, espe-cially overseas visitors and business people, had laptops with them as they travelled, so it made sense to try to offer them free Internet access so they would stay longer in the town, she said.

"We see this as a great promotional opportunity for Lawrence and an encouragement to get people to not just stop here, but to stay a little longer, buy that second cup of coffee, or have a meal instead of a snack, and take the time to notice the other great shops and sightseeing opportunities while they are here," Ms Arron said.

The service would be simple to use, she said.

Laptop owners would switch to wireless mode and be directed to a "splash page", which Ms Arron hoped would feature local business advertising.

Users would then log on as normal and begin surfing the Internet.

Internet use would be monitored and a cap could be placed on data downloads if they became excessive.

Ms Arron hoped local businesses would support the idea as they stood to gain the most.

The low monthly cost of providing the wireless service - $65 - was a small price to pay to provide visitors with something they could not experience in any other small town in New Zealand.