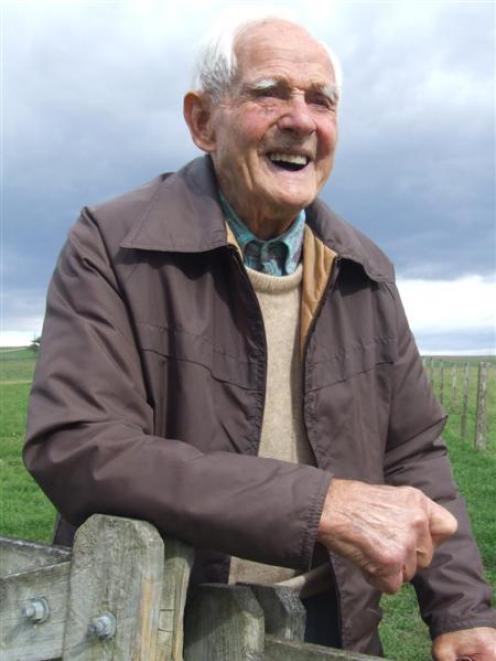 Before each winter, they would buy many laces from the bootmaker, as they had to cut them with a knife and prise the uppers of their boots apart to get their feet out.

"That is . . . freezing," Mr Wilson said, in his very matter-of-fact way, as he recalled his 14 and a-half years on Longslip, near Omarama.

Longslip Station, on State Highway 8 on the Omarama-Lindis Pass Rd, is celebrating, on March 21 and 22, 150 years of farming.

Born in Christchurch, where his father worked as a printer, Mr Wilson got a taste for country life when the family moved to a farm in Southland.

He worked for a while in Dunedin but got "browned off" with city life - "well and truly, too" - and told his father he was going to be a cowboy.

While Mr Wilson's mother had never let him try to milk a cow, he was the first hired cowboy on Longslip, starting work in 1926 aged 17.

Mr Wilson caught the train from Dunedin to Oamaru and then on to Kurow from where he was taken to Longslip.

When he looked out on the hills surrounding him, he thought, "What have I put myself into", and, when he struck a very cold winter, he recalled how he "nearly died of fright". He was one of only two men working on the property in those early years and he admitted to being very lonely and dropping "a tear or two into the pillow" when he first started.

He struggled initially milking the cow before breakfast - "I told the boss I'd never milked a cow before, I'd only watched Mum" - despite trying to copy how his mother did it.

Other duties included feeding the pigs and hens and his first job was to spend two days in the woolshed cutting dags off wool with a pair of shears.

An older workmate taught him the "ins and outs" of cooking and he was still putting those lessons to good use, busy in the kitchen of his Oamaru home grating onions for a pot of Irish stew.

Mr Wilson moved on from being a cowboy, or as he put it "lost my apprenticeship", to go mustering, as well as learning fencing, and he loved working in the hills.

He had a team of dogs and his favourite was a "hell of a good" dog called Scott. "I think he had more brains than me," he said.

He used to drive a mob of between 700 and 800 cull sheep from Longslip and neighbouring Dunstan Downs to Duntroon, a journey which took nine days. When he left Longslip, he went mustering on other properties.

Mr Wilson, who turns 100 in September, remains fiercely independent and with a razor-sharp wit, as well as a remarkable memory.

He still mows his nephew's lawn with a ride-on mower and tends an impressive vegetable garden.

He rides a mobility scooter which has a basket he modified to carry his shopping.

And as he reminisces about those days long ago in the hills, there is a touch of sadness as he says his mustering mates are all dead.

"I'm the only living blighter."