Bill may be introduced to change subdivision designation 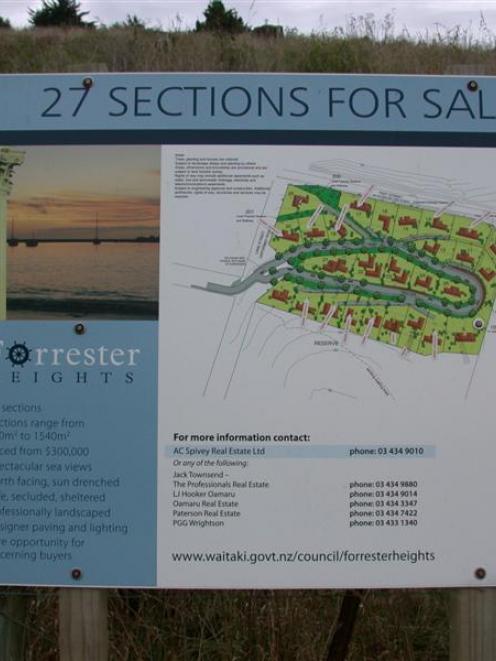 A private member's Bill may to introduced to Parliament to speed up the process to get title to land for the subdivision.

The controversial 27-section subdivision on 5.842ha looking north over Oamaru harbour and the coastline, proposed in 2006, has been held up because the council has claimed the land was incorrectly gazetted in 1937 as "reserves", when it was originally set aside in 1885 as "reserved", for the endowment of borough funds.

Since that was discovered, it has attempted to get the designation changed. The land was listed in the Reserves and Other Land Disposal (Rold) Bill put before Parliament in 2008, but held up since then.

The Forrester Heights land was listed with other land throughout New Zealand in the Bill.

The change in status of the land has been opposed by individuals, including Waitaki councillor Helen Stead, and groups, such as the Friendly Bay Society and Waitaki Citizens and Ratepayers. They want it retained as a reserve and not developed.

About $3 million of the profits from the subdivision was set aside by the council for the $10.3 million redevelopment of the Oamaru Opera House, but that has had to be covered by a loan.

Tomorrow, the council will consider promoting a local Bill through Waitaki MP Jacqui Dean, to change the status of the land.

Council chief executive Michael Ross said the move was to make progress on revoking the reserve status for land incorrectly gazetted in 1937.

The Rold Bill had been delayed at Parliament for reasons not related to the Forrester Heights land.

Information and research already gathered could be used to prepare a private member's Bill.

Mr Ross emphasised the private member's Bill, which would require a deposit of $200 with Parliament, was "simply a process" to get freehold title to the land.

It did not commit the council to any further action, including proceeding to develop the subdivision.