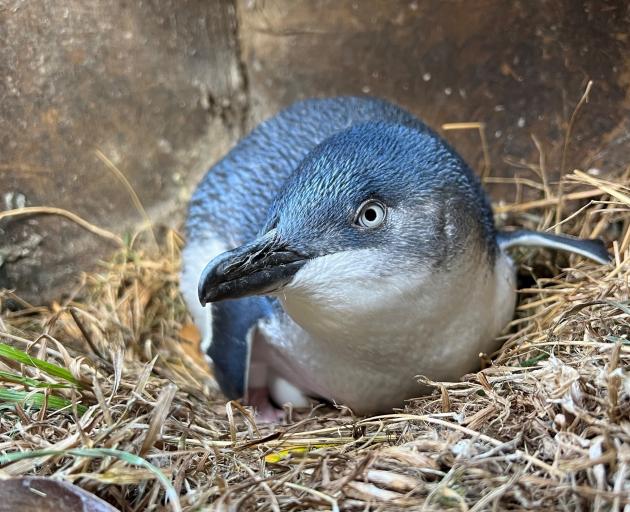 A male penguin sits on the Oamaru Blue Penguin Colony’s first egg for the 2022 season. PHOTO: SUPPLIED/PHILIPPA AGNEW
Not a lot surprises Philippa Agnew these days.

But when the new blue penguin breeding season at the Oamaru colony began earlier this month the colony’s science and environmental manager was unexpectedly caught off guard.

On May 4, the first egg for the 2022 season was laid, while 13 penguins were still moulting at the colony — the first time the moulting and breeding seasons have overlapped.

"It really is quite surprising," Dr Agnew said.

"But over the last few years I feel like nothing surprises me any more almost, because we have that really successful year [2020], and every week it seemed there was different news and different records were being beaten."

The female penguin who laid the egg was also one of the first to lay in 2019. That year, she fledged five chicks.

It was likely she would fledge several chicks again, Dr Agnew said.

The early start was likely down to the "perfect combination" of lower sea surface temperatures and high primary productivity.

All signs pointed towards there being plenty of fish close to the colony for the penguins.

There were only two penguins left to moult last week, and Dr Agnew expected to see more eggs laid soon.

The colony was also still recording "unusually" high numbers of penguins coming ashore each night for this time of year.

"This year, definitely from all the recorded years, is the highest — we averaged 229 penguins coming ashore per night for April.

"That’s what we’d expect to see during the breeding season."

Visitor numbers, affected by Covid-19 restrictions, had picked up during April’s long weekends and the school holidays, she said.