Bringing up six children key to long and happy life 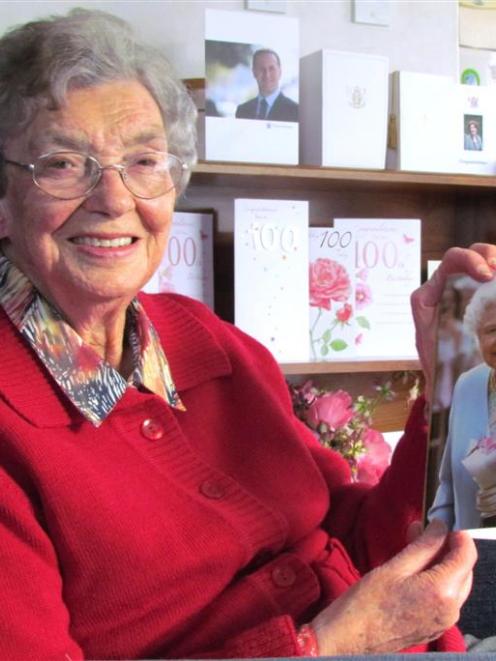 Oamaru's Bina Mulligan, who turns 100 tomorrow, with her birthday card from the Queen, and others including one from Prime Minister John Key behind her. Photo by David Bruce.
Asked what keeps her young as she approaches her 100th birthday, Bina Mulligan replies with a twinkle in her eye: ''six children''.

''You can't say that Mum,'' daughter No 1 Trish de Geest tells her.

''Don't put that in the paper,'' daughter No 2 Doreen Mavor warns.

The exchange shows Mrs Mulligan (nee Fallon) still has the sharp mind and wit needed to deal with her children and a family that has grown to 16 grandchildren, 25 great-grandchildren - and the first great-great-grandchild, who is expected next month.

Six children - two daughters and four sons - kept her busy when they were young.

There must have been something in the Fallon family genes when it comes to marriage.

All four had gone to Teaneraki (later Enfield) School.

But, Mrs Mulligan said, she felt bringing up six children on an Enfield farm was easier than the lot her sister had bringing up her children in Christchurch.

Mrs Mulligan was born on July 11, 1915, in Oamaru, raised on the family farm in Coalpit Rd, Enfield, went to Teaneraki School and then Teschemakers College.

Aged 15, she left school to work on the farm, then married in 1935, shifting a short distance to Tussocky Rd, where Mr Mulligan farmed. He also worked in the Ngapara coalmine.

They stayed there until the 1950s when son John and his new wife Joan took over the family farm.

On shifting into town, they lived in Chelmer St. Mr Mulligan worked for the Oamaru Borough Council works department, before retiring. Mr Mulligan

died 33 years ago and Mrs Mulligan moved to the Reed St town house she still occupies.

A keen hockey and badminton player, Mrs Mulligan was also actively involved in the Windsor Park Women's Institute, continuing as a member of the branch after she moved to Oamaru, travelling out to meetings with other Oamaru members to ensure it had enough numbers to keep going.

The branch no longer exists.