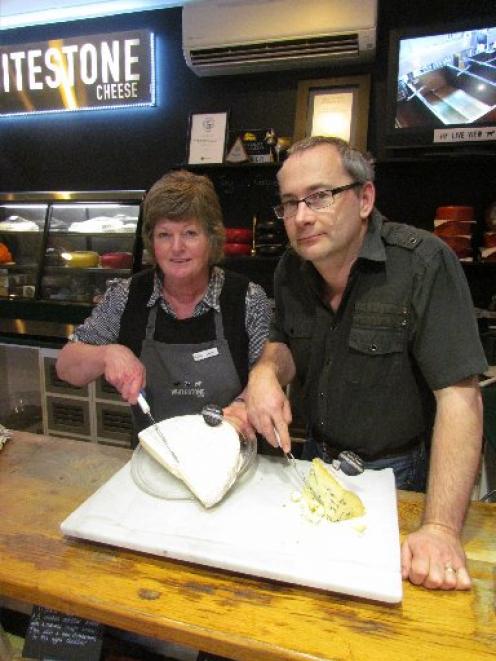 Whitestone Cheese employees Chris Thompson and Martyn Hall carve into a slab of blue cheese. Photo by Andrew Ashton.
Despite constant talk of recession and a so-called ''manufacturing crisis'' people in rural Otago are still better placed now than at any time since the introduction of Rogernomics in the 1980s to set up in business, an Oamaru cheese manufacturer says.

Whitestone Cheese was set up in a defunct Oamaru garage at the height of government deregulation and a severe rural economic downturn in 1987.

The company, now exports to eight countries and employs about 40 full-time and 20 part-time staff at its Oamaru factory and up and down the country.

Managing director Bob Berry said today's rural economy was still a ''much more positive environment'' for business than it was 30 years ago.

''In our rural communities it was very difficult in the '80s, but out of adversity often come opportunities.

''If you look at what happened in the '80s in terms of central government, and that's obviously when we went through [then Labour finance minister] Roger Douglas and deregulation, that was particularly harsh on our rural communities.

"But we've learnt to live with that and we have come out of it all the stronger - and in our case it was the reason the Whitestone Cheese concept was conceived.

''Deregulation affected farming communities quite harshly - the removal of all subsidies and concessionary loans. We had to face the realities of trading in the wider world.''

However, he added that as the company had grown there had been assistance provided by New Zealand Trade and Enterprise (NZTE).

''They assisted us in establishing ourselves in the United States, and we still receive assistance from NZTE with trade referrals. We have had referrals recently from the US, China, Hong Kong and Singapore, to name but a few.''

He added the trade referrals were welcome but the company would always ''stand on our own feet''.

''We built the business really from our own resources.''

But he said in rural regions in particular it was important to ''build on our strengths'' in education and agriculture.

''We are continually growing, we are putting more technology into the factory and we have built up a very skilled workforce there over the years,'' he said.

''Irrigation has brought a lot of jobs and opportunities, and hopefully will continue to do so, and that's an area where there has been government assistance.

"I'm a great believer in getting behind the assets we have.

"I believe in the [Forsyth Barr] stadium in Dunedin and hopefully we can get behind and bring the new hotel proposal to fruition. I see those as real positives for our region.''