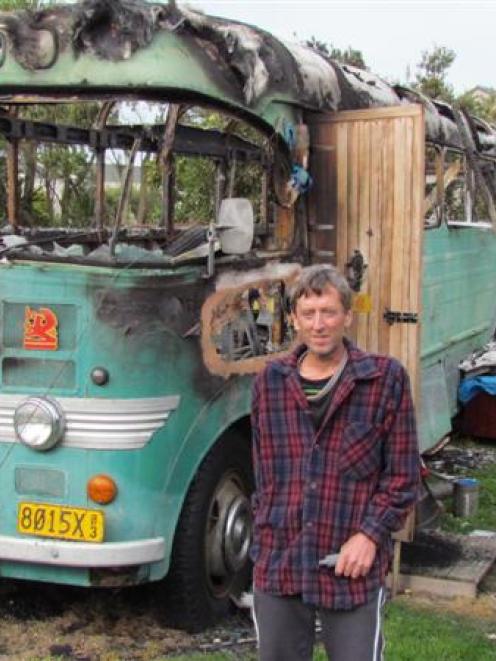 Oamaru man Colin Hitchcox beside his house bus which was destroyed by fire early yesterday morning. Photo by Ben Guild.
A house bus fire in Oamaru early yesterday has left a disabled man with little more than the clothes on his back.

Colin Hitchcox, of Oamaru, whose body-inclusive myosistis severely restricts his mobility, called emergency services after being woken about 3am by his cat to find the 1966 Bedford house bus he normally sleeps in ablaze.

Mr Hitchcox had earlier shifted from it to the house bus he built for his mother due to a smell he believed to be coming from a piece of wood he had put into a "fully enclosed fire".

They found the house bus "fully involved", but had little difficulty in extinguishing the blaze in eight to 10 minutes.

An ambulance was called as a precaution but did not transport anyone.

Mr Hitchcox was stranded yesterday, and inspecting the damage while attempting to reconcile himself to what had happened.

His car keys could not be found among the charred remains of the house bus, and his mobility scooter was rendered immobile due to the water which had saturated its battery.

"What I've got left is what I'm standing in," he said.

"There's nothing I can salvage at all. I just bought a new laptop.

"I can't even find the keys to my car, which is locked. I think they melted.

He did not know what had started the fire, and said his restricted movements had been no match for the speed with which the fire had engulfed his home.

"I can't fathom why it went up like that. I wish I did. It would make me feel better.

"It was that quick. By the time I realised what was happening and got down to the house it was all over."

He said the bus had been perfect for someone with his condition.

The former electrical engineer and business owner had bought, and slowly converted, the 1966 Bedford bus because it was made the year he was born.

The bus was not insured, and his mother's house and contents policy did not extend to his bus parked in the backyard.

A number of collectables, including Star Wars memorabilia and first edition James Bond novels, had been destroyed, along with his bed, kitchen, tools, clothes and much of his 17-year-old son's belongings.

Luckily, he was able to save his nearby mobility scooter and the house bus he had built for his mother, which sustained a smashed windscreen due to its proximity to the blaze.

Smoking his first cigarette in three months, Mr Hitchcox was yesterday turning his attention to the future, and scrapping the ex-railway bus he had spent hundreds of hours rebuilding.

"Just to get [the scrap metal dealer] to help me take it away is the best I can hope for," he said.

"I spent a couple of years getting this thing right for me.

"I'll have to find another one and start again. I'm not going to give up."