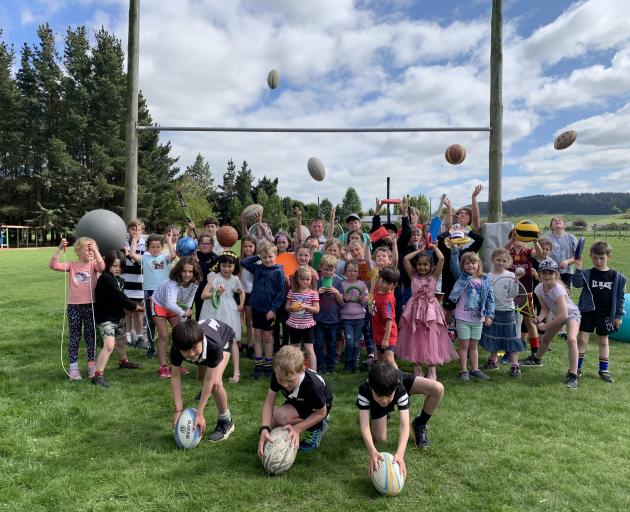 Yesterday, primary and secondary school pupils from Palmerston to Omarama took part in a district-wide mufti day to raise money for the proposed $24million six-court indoor stadium in Oamaru.

Weston School principal Deidre Senior said it was ‘‘really heartening’’ to see every school in the district get behind the fundraising drive to help create a wonderful legacy for the community.

‘‘Everybody who is associated with the schools — the students, the teachers, the whanau around all those students — are all playing their part in making it happen,’’ Mrs Senior said.

While the final district-wide fundraising tally had not been confirmed yesterday, Weston School raised $575, she said.

Mrs Senior, who is also a trustee on the Waitaki Event Centre Trust, said that the seed for a district-wide mufti day
was first planted with the North Otago Primary Principals Association, then the secondary school principals — and they
all jumped on board.

‘‘It’s such a positive community initiative and most of the feedback we’re getting as a trust is that this is well overdue and people are just pleased it’s happening,’’ she said.

Fundraising efforts were given a major boost when Papakaio couple Doug and Donna Hurst made a pledge to match every dollar the community raised for the project, up to $5million.

The Waitaki District Council also committed up to $10million towards the project, a Givealittle page has been launched and last week a flyer was distributed to households across the Waitaki district outlining how businesses and families could contribute.

Waitaki Event Centre Trust spokesman Kevin Malcolm said the response from potential and confirmed local funders had been ‘‘really, really good’’ and he was optimistic the Hursts’ $5million could be matched by November.

It was important the project was kept on track for a 2024 opening, especially for sports such as netball. This season, about half the scheduled junior and senior netball games were cancelled due to inclement weather.

Yesterday’s district-wide school support demonstrated how important a quality multipurpose event centre was for the Waitaki district, he said.