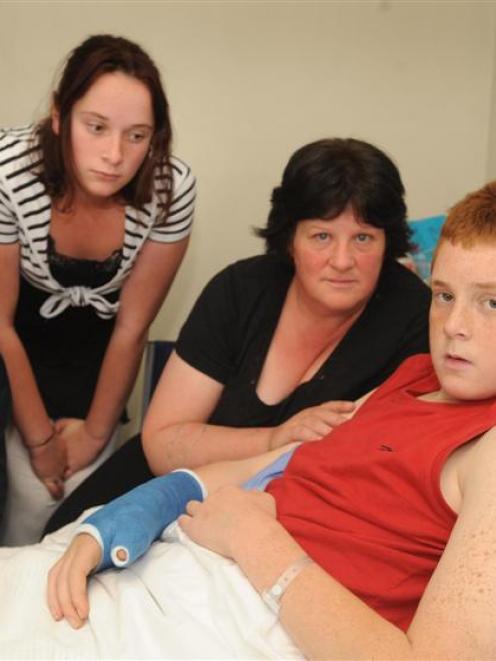 Aaron Macahan (right) recovers in Dunedin Hospital last month with his father, Mark, twin sister Lacey (14) and mother Jackie. Photo by Peter McIntosh.
The parents of a boy with a split kidney who was sent home from Oamaru Hospital last month and told to "harden up" are not making a formal complaint.

Last month, the Otago Daily Times reported how Aaron Macahan (14) was taken by ambulance to Oamaru Hospital with a swollen hand and complaining of a sore back, after he fell off his bike.

A doctor in the emergency department looked at Aaron's back and said it was a soft-tissue injury.

Aaron's father, Mark Macahan, said he was told by the doctor his son needed to "harden up".

When Aaron urinated blood late that night, Mr Macahan took him and a urine sample back to hospital.

He was sent to Dunedin Hospital in an ambulance.

A CT scan showed he had split his kidney and was bleeding into his back; doctors said he would have died if he had been left untreated.

When contacted yesterday, Mr Macahan said they had spoken to Oamaru Hospital manager Robert Gonzales and the head of the emergency department.

They agreed a urine sample should have been done.

He still had a clot on his kidney, but it was hoped it would slowly dissolve.

Mr Macahan was relieved his son was home, saying it had been stressful having to travel between Oamaru and Dunedin.