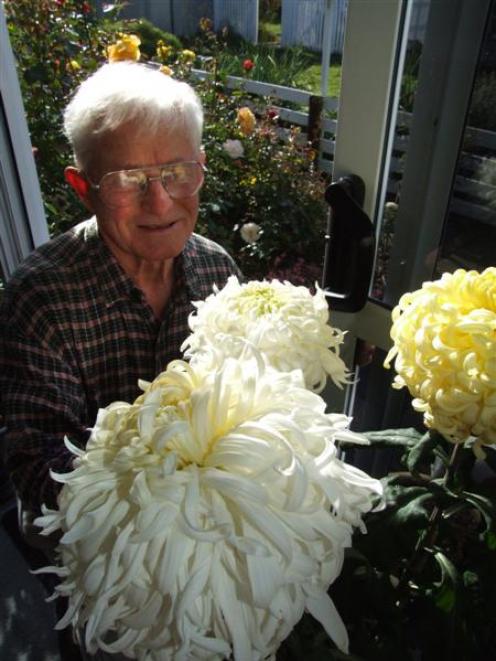 The show, being held in conjunction with the North Otago Horticultural Society's autumn show, will be open to the public in the Scottish Hall between 2.30pm and 4pm on Saturday, and 10am and 4pm on Sunday.

While Mr Smith also had a very large collection of narcissi, the chrysanthemum was his favourite flower.

They were challenging to grow and, with such a long season, much could go wrong.

"You never have a particularly good season. You're up against it with the weather," he said.

Mr Smith recently exhibited at an autumn horticultural show in Timaru and he was thrilled to win with a vase of chrysan-themums in the cut flower section.

"I tried to do what [his late wife] Nora would have done," he said.

Growing and exhibiting flowers was a team effort for the Smiths, Mrs Smith always staging the exhibits.

Mr Smith keeps most of his flowers in a tunnel-house at his son's property, about 7km from his home.

This weekend, he will be kept busy, as he is also show manager.

Judges would be looking for freshness, quality and form, along with colour and foliage to a lesser degree, he said.