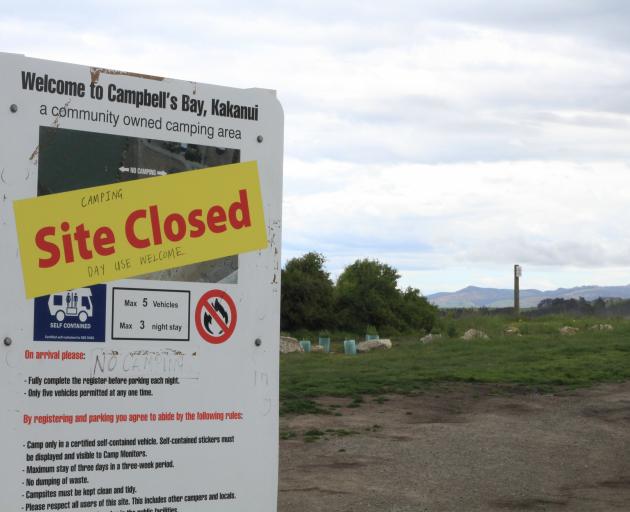 The Kakanui Ratepayers' and Improvement Society struck a land management deal with the Waitaki District Council over an area at Campbells Bay, 12km south of Oamaru, and allowed up to five self-contained camper vans to stay overnight on land the society owns. However, it decided this month allowing freedom camping at the once highly sought-after spot was unworkable, society chairwoman Rowena Norton said.

Policing the site was onerous for the society.

``We only really had one main monitor, and a couple of people helped out, and it didn't work because it was just too much for him,'' Mrs Norton said.

``In the long term, you've got to sort of have people that are willing to take the time to go down there, and a lot of people who have property there [at Kakanui] don't actually live there - they are holiday homes.''

Mrs Norton lived in Timaru but planned to retire to her holiday home in the area.

Two years ago, before the council enacted a bylaw, thousands camped at Campbells Bay during the tourist season, and some Kakanui residents described the situation as ``monstrous''.

Waitaki deputy mayor Melanie Tavendale, who spearheaded the council's freedom camping bylaw which came into force last year - and banned freedom camping in much of the Kakanui area, including Campbells Bay - said it was good to have certainty at the site as freedom camping at the seaside village had been a contentious issue recently.

``We've worked right through this process really closely with [the ratepayers' society] and looked at ways we could support whatever decision they went with, because we recognised that it was a community decision,'' Cr Tavendale said.

Mrs Norton said there could be some camping at the site on an invitation-only basis - Flying Kiwi tours were expected to return.