Farmer issues call to 'stand up' on freedom camping 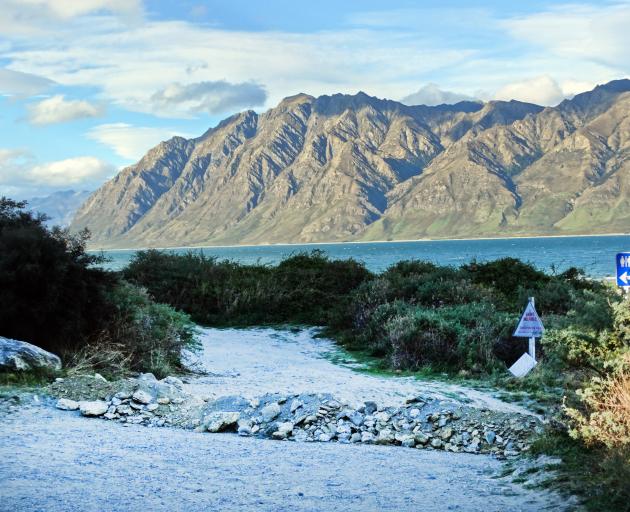 The entrance to a popular Lake Hawea freedom camping site was blocked by a pile of gravel and debris that had been laid across it. Photo: Kerrie Waterworth
Blocking the entrance to a reserve beside Lake Hawea popular with freedom campers was done by a young American man "concerned for the environment" - with help from a local farmer.

Yesterday, he said the university student, who flew back to the US yesterday, was in New Zealand on a three-month internship.

The pair were heading up the road with a tractor when the student suggested they block the entrance with gravel and debris. "I said yes, why not? I lent him my tractor," Mr Burdon said.

The reserve entrance had also been blocked by members of the Hawea community, in 2010. Mr Burdon said there was widespread support for the latest barrier.

"Until such time as we get some action from the Crown and some legislation changes on how we're going to manage 3½ to four million tourists, I would urge communities to stand up."

If they did not want to do that, then he urged them to write to Conservation Minister Eugenie Sage and request urgent changes on how such areas were managed.

"These people [freedom campers] don't care, whereas we all care because it's the place we take our families to picnic and to fish and there's native birds nesting down there and they are destroying habitat," he said.

Deputy chief executive Crown property Jerome Sheppard said Linz had been working "constructively" with local community members and other agencies to manage unofficial camping issues around Lake Hawea, which was a popular destination for visitors and locals but had no areas designated for freedom camping.

Because of its popularity, a toilet was installed at Craigburn, which was maintained by Linz, and signs would be installed soon to remind people that it was not a freedom camping area.

However, because the reserve was also popular with the local community, the public should not be blocked from accessing it. Another problem was there was now no space for visitors to stop beside the highway if they wanted to visit Craigburn Reserve.

The dumping of gravel and debris at the site would be investigated and Linz would also meet the Lake Hawea Community Association to discuss the issue.

Whatever it takes for the message that campervans/cars en mass and s*** near our waterways is not welcome. It is $7 to camp near Wanaka at Albert Town next to the Clutha River where there are toilets. We also do not want people washing themselves with soap and shampoo in our lakes and rivers and/or washing their dishes, with or without detergent in our lakes and rivers. If their time to relieve themselves has not occurred prior to a track walk, don't do the walk. Time to block off Blue Pools and Isthmus Peak tracks until toilets are installed. Shame for the people who never s*** on these walks to have to go without because of the many who do s*** in our gorgeous outdoor areas. Would they want us to s*** in their yard. Time for signage at airport arrivals, on the side of roads and inside rental vehicles with the no s***ing message and airlines to include it on screens. Time for rental vehicle companies to cease the refund if toilets on board are not used. Time for legislation by NZ Government for a levy to be paid by every tourist to cover service and infrastructure costs incurred to cater for them. Currently, these costs are covered by ratepayers.

Two things. When are we going to stop blaming tourists for the lack of facilities, and in some cases the majority of the campers are New Zealanders anyway, it is site dependent. People need to stop jumping to conclusions and witch hunting, just fix the problem with the facilities.

When I was at University in the mid 90s there was a study done that suggested any more than 3 million tourists visiting NZ annually would negatively impinge on your average NZers lifestyle. It looks like this is well and truly happening now.