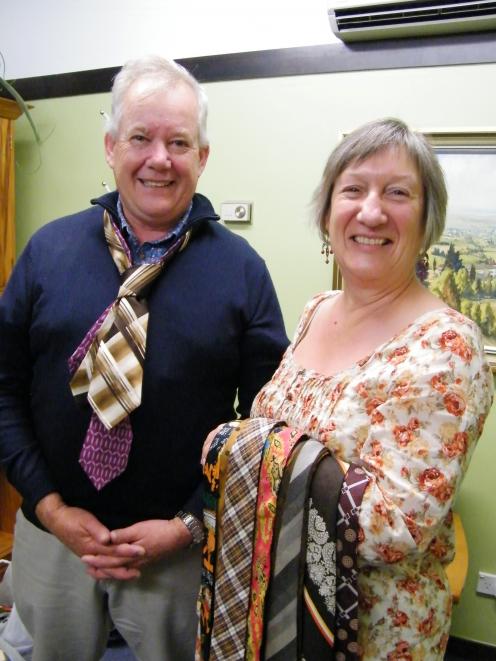 aimate Mayor Craig Rowley tries some ties on for size from Irene Sparks, who is aiming to set a new Guinness Book of Records for the number of ties collected by a grabatologist (tie collector). PHOTO: SUPPLIED
Irene Sparks admits she is obsessed with men's ties, but that obsession is going to help Waimate get a new multimillion-dollar community complex.

The Five Forks woman is aiming to set a world record for the number of ties collected by a grabatologist (tie collector).

She offered Waimate Mayor Craig Rowley 50c each for ties collected in his district, the proceeds to go to the Waimate District Community Complex.

She was fascinated with the textiles, culture, colours, companies, sports and other things associated with ties.

However, her passion was revived when Oamaru shop Retro Funk closed about two years ago and was selling up 100 ties. She bought the lot.

That started a collection that has grown to 10,800 ties, stored in 60-litre plastic boxes.

Then she read about an American grabatologist who had a Guinness Book of Records collection of 16,055 ties. Mrs Sparks is now going for the world record, aiming to collect more than 20,000 ties.

Mr Sparks is ''very supportive'' about the record attempt and, occasionally, even borrows a tie. His wife has been around op shops in the South Island, and after a recent trip to the North Island brought home about 1200 more.

About two months ago, when Waimate launched its fundraising drive to redevelop its stadium into a multimillion dollar community complex, Mrs Smart approached Mr Rowley with the aim of adding more to her collection, offering to pay 50c a tie.

First up was a ''bad tie day'' among 70 Waimate council staff, then an appeal to the community added 372.

Mr Rowley then issued a challenge to Mrs Barlow, Mr Kircher and Mr Odey to collect as many ties as they can to support the Waimate community complex fundraising.

Residents can drop their unwanted ties off to their local council headquarters.