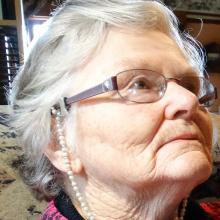 Thelma Beer
A recently formed Oamaru group is determined to help the kitchen at Oamaru Hospital survive, despite it looking increasingly likely the facility will not be retained.

On October 13, the Otago Daily Times reported there was speculation around the Oamaru community that the kitchen at the hospital would close and meals would be provided by an outside contractor.

At the time, Waitaki District Health Services chairman Chris Swann dismissed such claims but did confirm a review of the kitchen operation was under way, which included consultation with staff.

That consultation period has since closed and it has been confirmed that expressions of interest  have been sought from outside providers to prepare meals for patients at the hospital.

He did not confirm the kitchen would close, but said food preparation was not the hospital’s "core business" and consideration needed to be given to the financial costs associated with running the kitchen.

However, not everyone is convinced the potential move is the best option.

Thelma Beer, of Maheno, is strongly against the move and recently formed the Save Our Hospital Kitchen group, made up of concerned residents.

A former nurse, Ms Beer said she  spent most of last year "in and out" of Oamaru Hospital and  in addition to its staff, its greatest attribute was the quality of the food produced in its kitchen.

The group would meet in Oamaru tomorrow  to discuss its next move, she said.

She believed the proposal to close the kitchen was "about money and space", the validity of which she questioned. The change would "cost a lot of money. I don’t see that they are going to save a lot."

She was also concerned the quality of the food would suffer and patients might be forced to eat food of a similar quality to that served at Dunedin Hospital, which she labelled "real bad".

Waitaki District Health Services chairman Chris Swann rejected Ms Beer’s claims the quality of the meals served at the hospital might be compromised.

"The kitchen and the quality of the kitchen food is not going to be lost. We have got criteria in terms of outside providers looking to supply food. One, that they’re local, so they will employ local people and purchase locally, and second that the food is prepared fresh and plated.

"The community’s not losing the kitchen as such. It’s potentially going to be provided from somewhere else in the community. It’s going to have all of the attributes it has now."

Mr Swann declined to name the providers that had expressed an interest, but confirmed Observatory Village Lifecare, which has its own fully functional kitchen, was not among them.

These facilities throughout the country are needed to be retained for times of disaster. We need in a community to be able to rally and feed communities of people in large numbers.