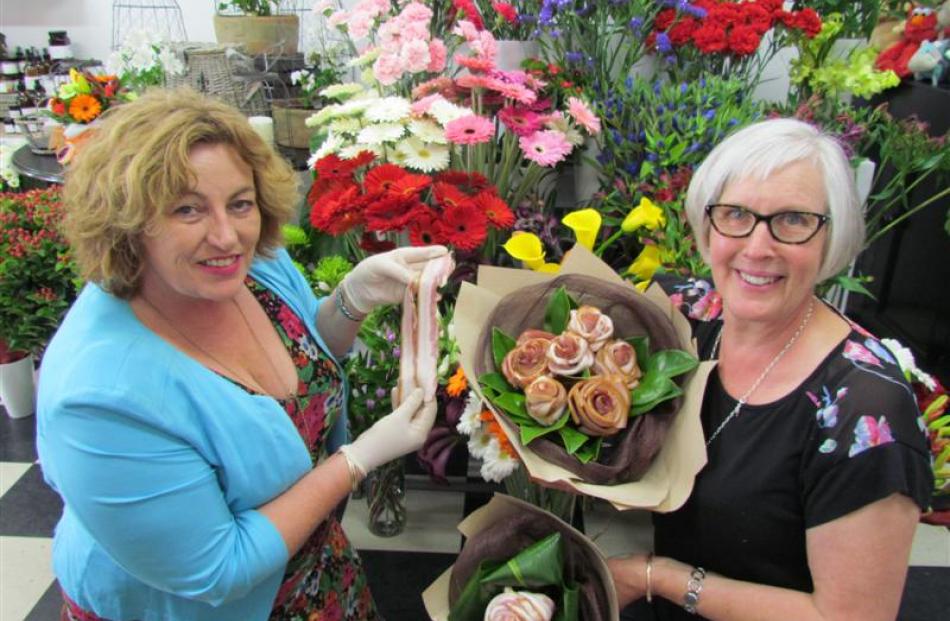 Streaky bacon from Waitaki Bacon and Ham's Sue Morton (left) is made into bouquets and single roses by florist Jonell, Johnson of Jonell's Florists in Oamaru, for Valentine's Day. Photo by David Bruce.

Bringing home the bacon has taken on a whole new meaning for Valentine's Day tomorrow.

Bacon bouquets as an alternative to other traditional flowers for lovers have created such a stir that, after two years of experimenting, next year they will be available in Oamaru for Valentine's Day.

The idea came from Waitaki Ham and Bacon's Sue Morton, with the help of Jonell's Florists Jonell Johnson.

''We are now ready to take it to another level,'' Mrs Morton said about people wanting to buy them.

The bouquets, which look like roses, along with some single blooms, are made from streaky bacon, with magnolia leaf to add the greenery, and wrapped in sinamay natural fibre, finished with butcher's brown paper and string. They come with a packet of Waitaki's streaky bacon to cook.

''Hubby can give the bouquet to his wife, and his wife can cook him the bacon for Valentine's Day breakfast,'' Mrs Morton said. An alternative was to give bacon bouquets to men on Valentine's Day, something to match roses for women.

Last year, only one bouquet was made, for display at Waitaki's stand at the Oamaru Farmers Market.

This year, half a dozen have been made, along with some individual flowers. One is being awarded as a prize, and the others have gone to buyers as far away as Nelson.

Such has been the response, next year they will be offered as part of Valentine's Day gifts.

Mrs Johnson said each bloom was made from 10 to 12 streaky bacon slices. The bouquet of six took about an hour to make.