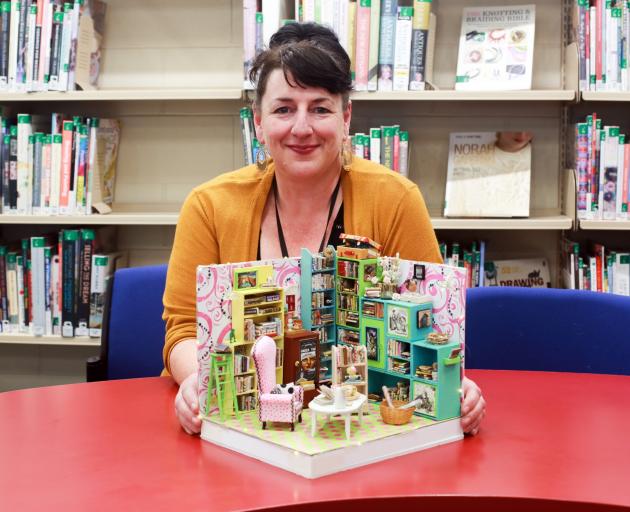 Waitaki district libraries digital services and reference librarian Debbie Price- Ewen with her book nook. PHOTOS: REBECCA RYAN
A tiny library within the Oamaru Public Library has been capturing the imaginations of visitors.

Created during lockdown by digital services and reference librarian Debbie Price-Ewen, the incredibly detailed diorama of a miniature library, or "book nook", has been on display for the past week.

It started as a lockdown project for Mrs Price-Ewen, who was missing the library and was inspired by a miniature armchair she created about three years ago.

"I was thinking more and more about how much I was missing the library and — voila," she said.

"I thought ‘you know, this will be for the community as well’ because they also missed the library and it became this awesome talking point."

Everything in it is handmade and incredibly detailed. The cupboards open and close and the books can be pulled off the shelves.

It had also inspired some community projects. The Oamaru Public Library was going to hold a competition for people to create their own dioramas and Mrs Price-Ewen planed to take a diorama-making workshop during this year’s Oamaru Victorian Heritage Celebrations, the theme of which was "literature".

"I’ll teach people how to make the books. There’s lots of little tips and tricks, because after making about 50 of them you kind of become an expert," she said.

Mrs Price-Ewen, who described herself as a "librarian by day, artist by night", said her next diorama project would be the "ideal 1970s bedroom".

"I’ve got the bug now — apparently it’s an addiction," she said.