Potato racing: tourism on a roll 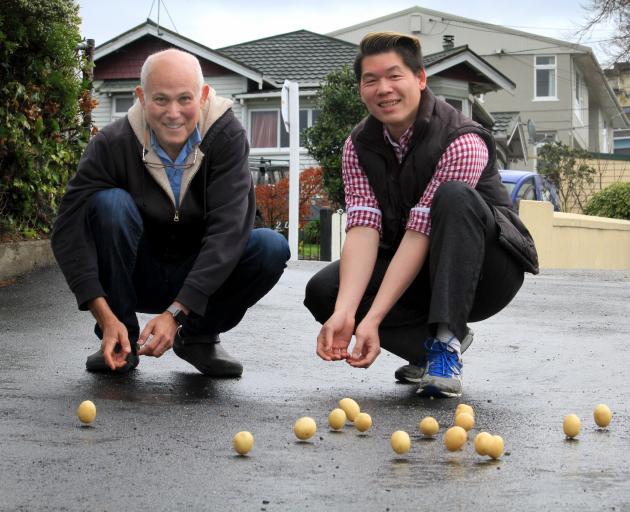 Hundreds of humble spuds will bounce and roll down Wansbeck St on October 8 in the Great North Otago Tato Race, a race intended to become a fixture on Oamaru's calendar, organisers say.

The race was taking a page from the manual of the annual Jaffa race in Baldwin St, Dunedin, but the Waitaki Tourism Association had more in store for future years, board member Ole Wallis said.

The Waitaki Tourism Association had wanted to celebrate Oamaru's signature Jersey Bennes for some time, but adding to Oamaru's calendar of events, while championing the gastronomy scene, had been the original plan, Mr Wallis said.

Because the plan was to introduce an event before Labour Weekend this year, the association would hold off on a proposed week-long food festival and organise just the one signature event as an appetiser this year.

With one month to go before the street was closed and ''tatoes'' tumbled from Wharfe St down the hill towards the Oamaru Farmer's Market, many of the final details of the plan were still being sorted.

Mr Glucksman said because the tourism association wanted to create an event outside the Waitaki district's peak tourist season, and a number of events already were on the calendar, the October date was chosen by default.

With the Oamaru Victorian Heritage Celebrations in November, and Christmas events in December, before the busy summer season, and Easter, the Harbour Street Jazz and Blues Festival, and the Steampunk NZ Festival in May all drawing people to town too, the Great North Otago Tato Race had to slot in prior to the traditional start to the tourism season in Oamaru, which begins at the end of October.

Oamaru restaurateur Sally-Ann Donnelly, said although this year Oamaru's Jersey Bennes would not be ready for the potato race, she believed the celebration of the fertile soils of North Otago had promise.

And next year, the event would grow, with the starchy tuber North Otago was renowned for taking centre stage.

''Now we really need to get it out to restaurants to do something with potatoes in the week building up,'' she said.