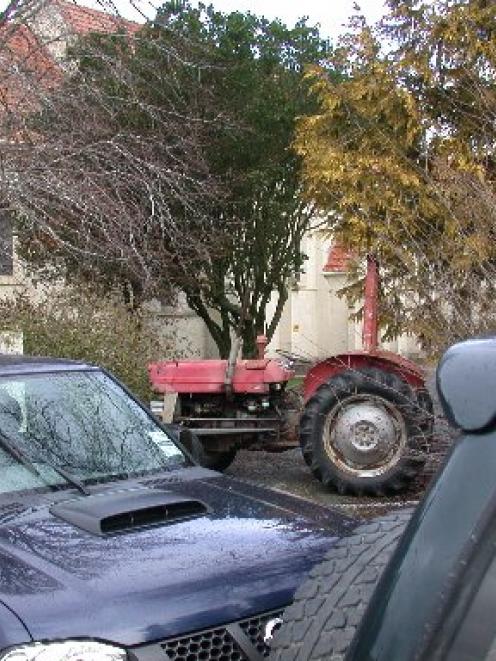 A tractor and two vehicles yesterday block road access to the chapel (background) at the former Teschemakers College girls' Catholic boarding school in an attempt to stop the removal of its altar. Photo by David Bruce.
Dunedin's Holy Name Parish might contravene the Waitaki District Council's district plan if an attempt is made to remove the altar from the Teschemakers chapel, district councillor Peter Garvan says.

The issue sparked protest action at the site yesterday as three vehicles were left parked across the Teschemakers entrance in a bid to stop a work crew from getting in to start the removal.

It is understood work to dismantle and remove the marble altar will start today.

The altar has already been given by the Dominican Sisters to the Holy Name Parish, with a formal legal deed of transfer signed.

The chapel is listed in the district plan as a category B protected item.

It is stated that any demolition, removal, alteration or addition to a heritage building, object, property or place of special interest identified as category B will be a discretionary activity, meaning resource consent is required.

The legal issue was whether the "removal" of the altar or "alteration" to the building required a resource consent.

No application had been made for consent, Cr Garvan said.

In his opinion, there was a strong argument the altar was not a fitting and was a fixture and an "integral part" of the chapel, thereby requiring resource consent to remove.

"The altar is several tonnes in weight, sits on its own substantial concrete foundation and may be affixed to that foundation," he said.

However, former Teschemakers pupil Margaret Young (nee Hart), whose great-uncles and aunts donated the altar to the Dominicans in memory of their parents, Ben and Mary Hart, contacted the Otago Daily Times to support the Sisters' decision.

Members of the Hart family were parishioners of the Holy Name parish, so it was a fitting place for it to be used, said Mrs Young, who lives in Queenstown.

With the uncertainty of what would happen to the land and buildings once the Teschemakers property was sold, it was better to have the "beautiful" altar as an integral part of a vibrant parish, as the benefactors would have wished.

It should not be kept as an exhibit in a "museum".

"The Dominicans have given so much to communities throughout New Zealand, and it is sad to see them being attacked for a decision they would have reached after much discussion and prayer.

A decision they believe is best for the treasures they own," she said.

Bruce Albiston, who owns historic Burnside Homestead, has written to Sr Elizabeth Mackie, of the Dominican Order, and Fr Mark Chamberlain, of Holy Name Church, appealing to them to desist from beginning the removal, and asking for time for the matter to be resolved.

"However well intentioned, this would forever rob both Catholic history and the district of a treasure that was endowed to this place by local benefactors. It should not happen," he said.

Mr Albiston is a former southern general manager of the Historic Places Trust.

Ms Brown invited Sr Elizabeth to attend a public meeting in Oamaru on August 13 but she declined, saying as the legal deed for the transfer had already been finalised and as work was about to begin, it would be inappropriate for her to attend.

In an email to Ms Brown and others who expressed concern about the removal, Sr Maureen O'Hanlon, for the New Zealand Dominican Sisters' Leadership Team, said to comply with the owners' request that they make decisions about items in the chapel for which they were responsible, the decision to transfer the altar was made in 2009.

Implementation was delayed at the request of various parties in Oamaru, including Waitaki Mayor Alex Familton.

When nothing was forthcoming, the final decision was made in February this year, she said.