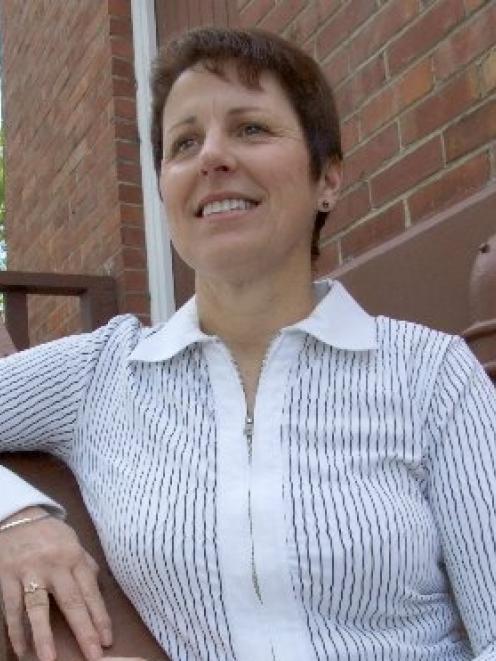 Helen Algar is enjoying her new role as Waitaki community safety officer. Photo by Sally Rae.
"If you make a difference for one family, then it's worthwhile." Since the death of her teenage son in 2003, Oamaru woman Helen Algar has been involved in raising public awareness about text-message bullying.

Daniel Gillies' body was found at the bottom of a cliff near the blue penguin colony after he failed to turn up for his morning paper run.

Mrs Algar believed bullying text messages were a significant factor in the death of the 16-year-old, who had the genetic condition neurofibromatosis.

Back then, parents had "absolutely no awareness" of text bullying, but plenty of "really good" education had occurred in the intervening years.

Speaking out initially took much soul-searching, "because you're exposing yourself, and Daniel, who doesn't have a say in that".

But raising awareness was becoming less necessary because society had picked it up and it had become an international issue.

It was heartening to see cellphone companies taking some responsibility, she said.

Vodafone has launched a blacklist service that will allow cellphone users to block unwanted text messages and pictures in a bid to counter text bullying.

"There's been really good education and there are really good resources out there for parents and for children," Mrs Algar said.

Education was the key - "It's about kids knowing what they can do to keep themselves safe" - and parents needed to take some responsibility, which was not always easy.

Parents needed to know when their children were accessing the internet, and monitor both cellphone and computer use.

And it was not just for the risk of bullying.

"If you've got a mobile phone buzzing under your pillow ... you're not getting sleep; you're getting broken sleep."

During workshops she was involved with recently in North Canterbury, school pupils were asked why they needed cellphones at school.

The response was "to keep in touch with people", yet there was no need for them to have phones at school, given a school phone was available in an emergency, she said.

"We're building a level of anxiety among people. They have to, at all costs, be in touch with somebody.

"We're building that level of dependency on that connection to other people."

Being able to make a difference in a community was something Mrs Algar enjoyed, and she has been heavily involved in the North Otago community.

Previously the council's active transport co-ordinator, she was attracted to the community safety job because it gave an opportunity to be innovative, develop projects and work with the community.

There were many community partnerships in the role, which was something she enjoyed, and she also enjoyed working with the council.

"You can make a real difference to a community in a role like this. You can have a really positive impact," she said.

After six years as a board member on the Otago District Health Board, which involved travel to meetings in Dunedin, she was looking forward to focusing on her new role and what was happening locally.

Next month, Mrs Algar will graduate from Otago Polytechnic with a bachelor of social services and a graduate diploma in strategic management.