The Waimate Shears competition is shifting to a new home after about 40 years at the Waimate Stadium.

With the omission of a permanent stage and loss of existing storage space in the new complex, the Waimate Shears committee had decided to build elsewhere, committee member Warren White said.

It had identified the Waimate Showgrounds as its new venue and, after negotiations with the South Canterbury Agricultural and Pastoral Association, reached an agreement to redevelop the Dempsey Pavilion, at the northern end.

While a concept plan would be completed soon, it was proposed to double the size of the pavilion and build a permanent stage and storage at one end, toilets and showers, and an outside barbecue sheltered area.

The new facility would be suitable for other functions, such as 21st birthdays and weddings.

Mr White said the work would be done in stages and as money permitted. The estimated cost was about $150,000. Almost $50,000 had been raised, enough to start stage 1.

Local tradesman approached so far had volunteered to help rebuild the pavilion and anyone else who could provide assistance could contact Mr White.

Work was expected to start in the spring so this year's competition, the 48th, would still be in the stadium in November.

It was hoped to have the Dempsey Pavilion ready for next year's shears.

The event started in the Olympia Hall in the dead end portion of Shearman St. When that was sold, it shifted to the stadium, which was redeveloped from the drill hall through fundraising by the Winter Sports Association, Waimate Shears and the Waimate Poultry Club. 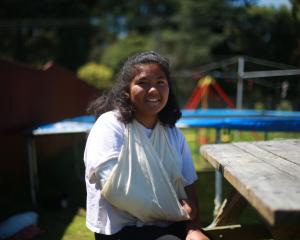