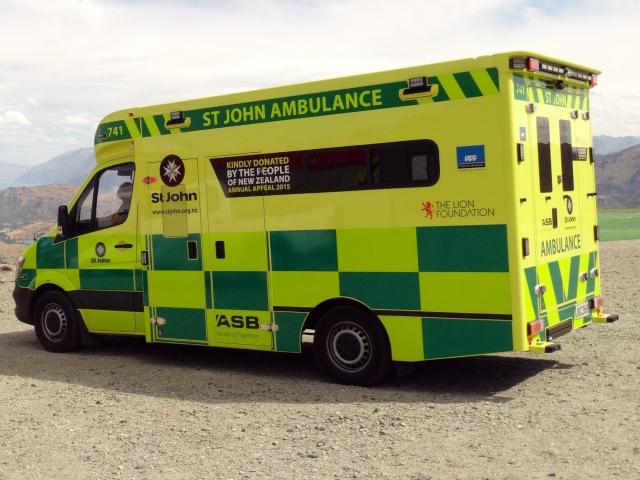 An at times testy crowd gathered at Oamaru Library this week to hear St John's plans for a new purpose-built ambulance station at Awamoa Park.

At a "pre-consultation information session", St John area administrator Kara Cox and rural Otago territory manager James Stewart laid out how the organisation came to view the corner of the park in Wansbeck St as its preferred site.

But not everybody among the crowd of about 70 people was on board - several asked whether it was essential for St John to be outside of a tsunami zone, or for more information on other possible sites, and they were asked whether a possible future co-location of emergency services was considered.

At the 90-minute information session with a question-and-answer period, Jim Caldwell, an 81-year resident of Oamaru, said despite NZ Transport Agency's assessment the ambulance station would have minimal impact on traffic, congestion in the area could be a "nightmare" in the late afternoon - but his issue with the location was more fundamental.

Mrs Cox said St John had been in its station in Coquet St since 1981 and began looking for a new site in 2014.

At least eight sites were investigated, and Awamoa Park was identified in 2017.

The Coquet St station required ambulances to negotiate a busy Eden St parking lot on the way to an emergency, affecting response times, whereas the Awamoa Park site offered immediate access to State Highway 1, and the neighbours could expect just 1.8 calls with lights and sirens in a 24-hour period.

She said although the organisation planned to cut down 11 trees it would plant 20 more - nine English oaks, five Norway spruce, five walnut trees and a fruiting plum.

"We don't want you to feel like you have lost your park, at all," Mrs Cox said.

Mr Stewart confirmed the former North Otago Returned and Services Association building, in Itchen St, had been investigated but was deemed unsuitable for several reasons.

The Waitaki District Council voted on October 30 to publicly notify the intention to reclassify part of the reserve.

Waitaki Mayor Gary Kircher said if, or when, St John came to the council with a formal application, the council would be required to make two decisions on the process - but reclassifying the park was likely to be consulted on, along with an expected resource consent application, so the public could make one well-informed submission.

"The public love their green spaces and we're loathe to give them up too easily - so it's really: what is the feeling from the general public about this particular site? What are the concerns? What does the support look like?

"And we've tried to make it as democratic a process as possible," Mr Kircher said.

"Wherever they go, we want St John to be able to deliver the services we all rely on - that's the important thing for me, to make sure we are helping the residents of Oamaru and North Otago get the services they need."

Unbliminbelievable. Given that it is likely FENZ will soon run our emergency ambulances, i would think it prudent to co share with the Fire Station now. To build a station on a sports park shows contempt and to build on a busy highway shows arrogance.
With emergency services, too much emphasis is on their buildings. Fire stations don't put out fires, police stations don't arrest people and ambulance stations don't do CPR.

St John have no money as they keep reporting. A new station would not be owned by the local community but by the Order of St John. Best solution would be to co share with the Fire service on the main road. Shared site enables use of training areas and support from each other.